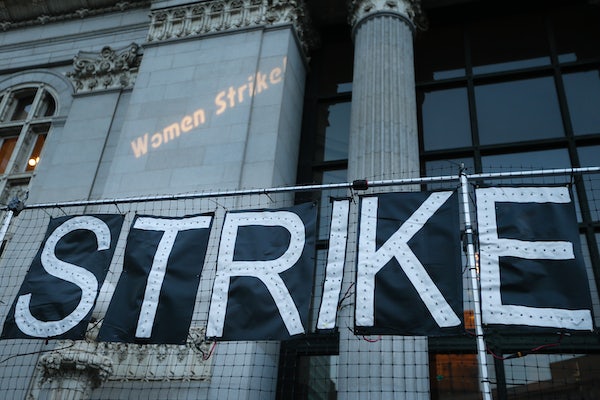 Zach Beauchamp has a long piece out today on the roots of right-wing populism and the ways in which the left can combat it. It tries to frame the existence of far-right movements in European welfare states as proof that economic populism is the wrong direction for the Democratic Party in the United States. “Providing white voters with higher levels of economic security does not tamp down their anxieties about race and immigration—or, more precisely, it doesn’t do it powerfully enough,” Beauchamp writes.

There is a lot to unpack in this 4,000-word essay. But let’s start with his discussion of Labour leader Jeremy Corbyn, which is indicative of the larger confusion that hurts Beauchamp’s argument. Here, he implies that Corbyn, an unapologetic man of the left, bears some responsibility for the U.K.’s rightward shift:

Take Britain’s Labour Party, which swung to the populist left by electing Jeremy Corbyn, a socialist who has proposed renationalizing Britain’s rail system, as its leader in 2015. The results have been disastrous: the Brexit vote in favor of leaving the European Union, plummeting poll numbers for both Corbyn and his party, and a British political scene that is shifting notably to the right on issues of immigration and multiculturalism.

The exodus of the white working class from Labour began long before Corbyn ran for the party’s leadership. It can be attributed directly to the failings of the centrist Tony Blair-Gordon Brown era, which resulted in the invasion of Iraq, a financial crisis, and a general exhaustion with the left. The decimation of Labour is also inextricably related to the rise of the Scottish National Party, which is left-wing and was opposed to both Brexit and the Tories’ austerity policies.

The word “austerity” is also key here precisely because it’s missing from Beauchamp’s analysis. He frames xenophobia in Britain as a manifestation of pure racial resentment. But this is only half-correct. People fear immigrants because they’re non-white, certainly, and also because they think immigrants will take their jobs. The latter fear is why British xenophobes also single out white immigrants—like Polish people—for opprobrium.

Similar problems are evident when Beauchamp shifts to the United States. To argue the futility of leftist populism, he cites the November defeat of Midwestern “progressive populists” Russ Feingold and Ted Strickland. But he ignores the unexpected success of Bernie Sanders’s presidential campaign. Sanders outperformed Hillary Clinton in conservative states like West Virginia. He also reliably outperformed her in head-to-head polling against Trump, and Clinton suffered from a real enthusiasm gap in November that can’t be blamed entirely on Trump’s racist appeal to the white working class.

Beauchamp cites the fact that white voters reject wealth redistribution if they believe wealth flows to non-white groups, as evidence that these voters would swing Democratic more often if racism weren’t a factor. This is undoubtedly true. But it’s also true that the party has played down the redistributionist aspects of its platform, and we are operating in a climate shaped by this neglect. Beauchamp is essentially arguing that the party should double down on this strategy.

“If Democrats really want to stop right-wing populists like Trump, they need a strategy that blunts the true drivers of their appeal—and that means focusing on more than economics,” he concludes. But this is not an argument against the left. In fact, this is close to what the left asks of the Democratic Party. The left does not want to discard identity politics in favor of a purely economic message. It is asking for a more coherent identity politics, one that realizes that Trump has tapped into a specific combination of racism and economic grievance.