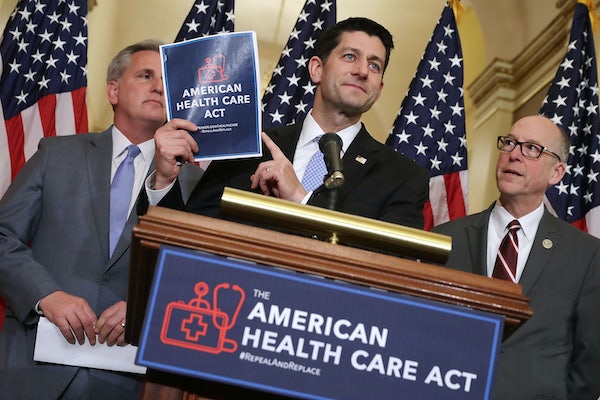 The projected damage of Trumpcare is even worse than anticipated.

It’s official. Under the American Health Care Act—the Republican legislation President Donald Trump supports to repeal and replace former President Barack Obama’s Affordable Care Act—24 million more Americans will be uninsured by 2026, according to a projection on Monday from the Congressional Budget Office. The CBO concluded that 14 million more Americans will be newly uninsured by 2018—just in time for the midterm elections.

This news was always going to be grim, but it’s worse than many analysts feared. (The Brookings Institution predicted that the CBO would project at least 15 million Americans losing insurance within a decade.) The CBO made devastating projections about how the legislation would harm vulnerable groups.

The report also revealed exactly how much of a tax cut the wealthiest Americans are likely to get under the GOP plan.

The drop in the number of uninsured largely comes from the repeal of the individual mandate, which in turn will lead to a bump in health care costs as million of people leave the health insurance market. Changes to the way Medicaid is financed will also lead millions to lose their health care coverage. It’s a devastating report, but Speaker Paul Ryan is spinning it the best he can—with no mention of the people who will be affected.