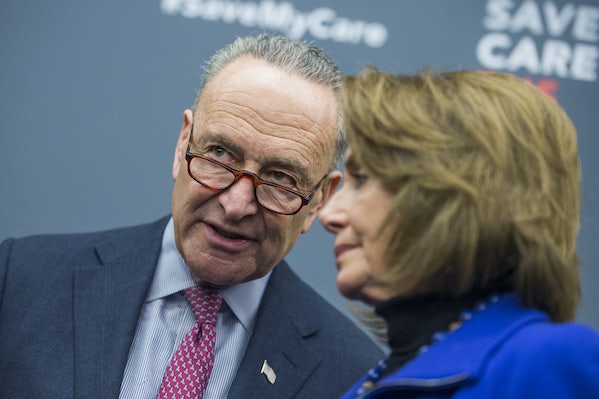 Democrats have got to stop using lame health care slogans.

In the middle of a story about the Democratic Party’s health care strategy published on Sunday, Politico reported on a rather embarrassing subplot involving Senate Minority Leader Chuck Schumer and House Minority Leader Nancy Pelosi. Not only were the party leaders bandying about bad slogans in the health care debate, they couldn’t agree on which bad slogan to use:

While Schumer and other Senate Democrats have seized on “Trumpcare,” House Democrats have made a conscious decision to avoid the term, reasoning that Trump’s supporters may rally around it, according to a Democratic official.

Instead, Pelosi and her top lieutenants were still using the slogan “make America sick again” earlier this week. But a spokesman for Pelosi on Sunday said House Democrats, too, had decided to stop using the phrase.

Indeed. But Democrats haven’t learned their lesson. Early this week, they were pushing a new slogan: “Trump Doesn’t Care.”

This isn’t helping. Even if you set aside the fact that this is a deadly serious debate, this is bad messaging—these are mealymouthed, corny slogans that aren’t punchy at all. “Someone might look at this and now call it not Trumpcare but Trump doesn’t care,” Senator Chris Van Hollen said on the floor of the Senate on Tuesday. Kellyanne Conway’s standup had more bite and a better sense of what hits. Anything that isn’t about how 24 million people are going to lose their health insurance, and how health care costs will rise so Republicans can give rich people tax cuts, is beside the point. The bill is the battle, just as it was for Republicans trying to kill Obamacare in 2009. Not only did they cast the Affordable Care Act as a “big government takeover,” they literally said it would kill you.