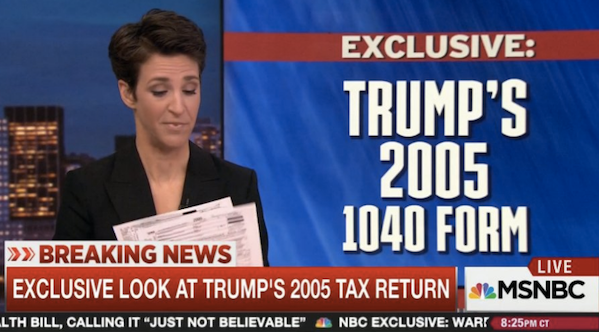 If Donald Trump will acknowledge his 2005 tax return, why not release the rest of them?

Twitter blew up, to put it lightly, when Rachel Maddow tweeted that she had Trump’s tax returns. After it emerged that she had a 1040 form from a single year, it was clear that she and reporter David Cay Johnston did not have a smoking gun. Maddow’s scoop was good—no one else has Trump’s returns—but it couldn’t keep up with expectations.

The show did itself no favors by being, well, a Rachel Maddow show. There was a long lead-in that was extremely speculative. (Could Donald Trump have been doing business with shady Russian mafia figures? Who knows!) Then we got the reveal: Trump in 2005 was still using the nearly $1 billion tax write-off that The New York Times brought to light last year, and paid a $36.3 million in income tax on $150 million in income. Of that $36.3 million only $5.3 million, a rate of less than 4 percent, was regular income tax—the rest was paid under the alternative minimum tax, which Trump has pledged to repeal.

This is maybe as favorable a result as Trump could expect from a story involving his taxes: He paid more than Mitt Romney, and at a slightly higher rate. The worst stuff here—that he was still using the $1 billion deduction and paid taxes the way ultra-rich people do, which is to say barely—was already widely known.

But Maddow’s scoop is still important for a number of reasons. Despite being speculative, Maddow rightfully framed the story as being one about what we don’t know (i.e. what Trump’s finances say about his relationships with foreign governments) as opposed to what we do (i.e. the figures on the two pages she proudly held up again and again). This is the way to build pressure on Trump.

The most important element of this story may end up being the White House’s response. The White House essentially scooped Maddow, releasing this statement before her broadcast:

The natural response to such a story would be to stick to the details. The real story, Sean Spicer could say, is that Donald Trump paid over $30 million in taxes in 2005! But by acknowledging the contents of the return before it was reported, and by claiming that there’s nothing to see here, the White House is basically conceding that there is no reason for Trump not to release his tax returns for other years, as other presidents have done. Failing to do so would only acknowledge that there is something to hide.

Maddow’s segment may not have found a smoking gun, but it neatly undercut Donald Trump’s argument for not releasing his tax returns.