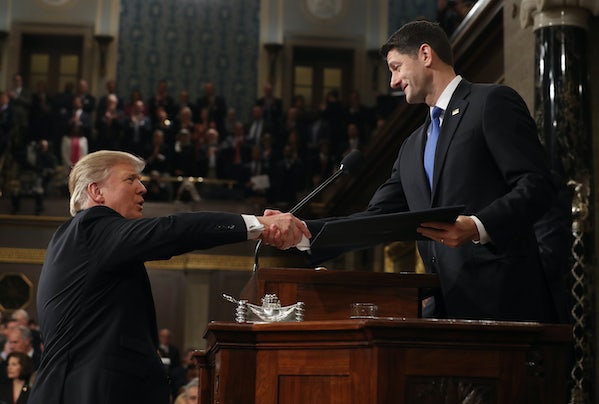 Trumpcare is this close to failing—and is splintering the GOP in the process.

Lost in the feverish discussion of Donald Trump’s 2005 1040 tax form on Tuesday night was the fact that the GOP’s health care bill was on life support, having endured eight straight days of increasingly negative coverage. Moderate Republicans—especially those in districts that might be competitive in 2018—are running away from the bill in the wake of the CBO’s devastating report that Trumpcare would leave 24 million people without health insurance. Meanwhile, those on the party’s right wing—the ethno-nationalist, Breitbart wing—are trying to settle old scores.

“Trump figures things out pretty quickly, and I think he’s figuring out this situation, how the House Republicans did him a disservice,” friend of Trump Christopher Ruddy, who on Tuesday wrote a sharp piece calling for Trump to abandon the current bill, told The Washington Post. “President Trump is a big-picture, pragmatic Republican, and unfortunately the Ryan Republican plan doesn’t capture his worldview.” Earlier this week, Breitbart posted audio of Paul Ryan effectively abandoning Trump in October. And on Tuesday evening, while the rest of the world was obsessing over Trump’s tax returns, Lou Dobbs called on Ryan to resign.

In other words, the chaos surrounding the bill has become an opportunity. Some are using that opportunity to distance themselves from Trump because they think it will help them next November. Others are using it as an opportunity to try to purge the Republican leadership of those they view as anathema to their goals.

One big problem for Trump and Ryan is that it’s hard to pin down exactly what to change because everything about this is going wrong. The bill has been condemned for a baffling mix of pragmatic and ideological reasons, and it’s not clear if a second pass should be more pragmatic or more ideological. Ruddy would say the former, while the Heritage Foundation would probably say the latter. In any case, a second bill doesn’t necessarily solve the problem of building a coalition.

The GOP certainly cannot count on its leaders to do that. Ryan clearly isn’t able to swing things and Trump has barely done anything resembling whipping. And given Trump’s popularity (or lack thereof) and the fear of being attached to health care reform that will backfire politically (it always does), there’s no indication that Trump being more involved would help. It could very easily hurt.

Republicans control the government, more or less, but Donald Trump’s 18-month campaign exposed every fissure within the Republican coalition and his election has done nothing to heal those wounds. Repealing and replacing Obamacare has further divided an already divided party, not brought it together.