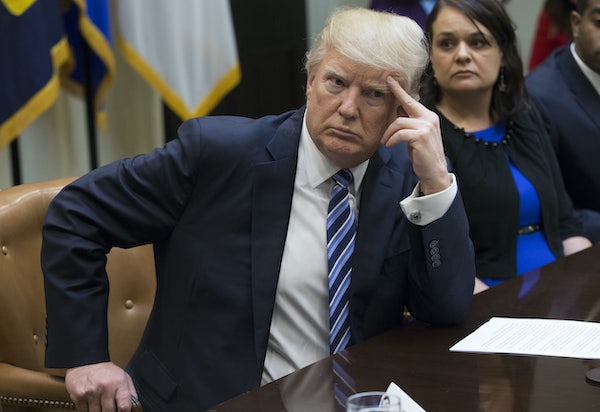 Question for Trump supporters: Is your guy a dupe or a scam artist?

These caretakers are motivated in part by a desire to limit his association with a major public failure, but also by recognition that the American Health Care Act would break faith with Trump’s supporters, millions of whom would lose their insurance, after Trump explicitly promised them otherwise.

Explaining away Trump’s entanglement with something known colloquially “Trumpcare” is a tough assignment. Conservative columnist Byron York chalks it all up to Trump’s inexperience. “New to Washington and with no experience in public office, Trump has become a prisoner to the House Republican leadership,” he writes, “or more precisely, to the complicated procedural requirements of the House and Senate, and the judgment of the GOP leadership that must operate within those boundaries.”

This is an abrupt turnabout from the mantras Trump and his allies used to get him elected: that America’s political leaders are stupid, that Trump is a world class negotiator, that he alone can fix the country’s problems.

But it really is one bad thing or another: Either Trump is “falling into Paul Ryan’s trap,” in which case he’s a naive oaf, rather than a master dealmaker, too manipulable to be president; or he’s acting willingly, and all of us (skeptics and defenders alike) must admit that his populist appeal was all artifice. So which is it?