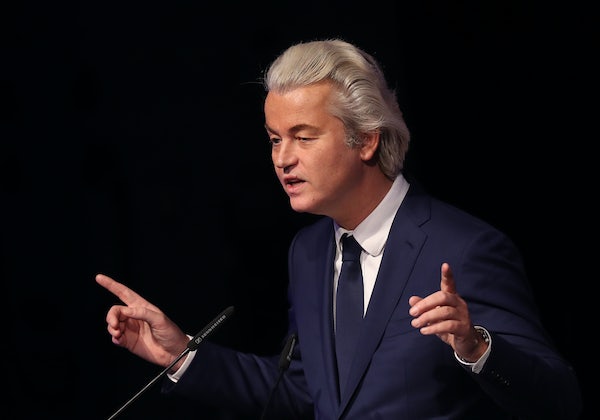 Nigel Farage hailed Brexit as the first stage of a “global revolution” and Donald Trump’s election as its second stage. Un-fun Falstaff/dumb Satan Steve Bannon agrees. Here’s how he saw the world in 2014:

Trump’s victory, in his view at least, was part of this global revolt against the liberal state. (Bannon has also suggested that he’s a “Leninist” out to smash the modern state.)

But on Wednesday, the global Trump revolution took a hit when the awkward face of Dutch racism Geert Wilders and his anti-immigration party—which wants to ban Islam, exit the EU, and is a “party” in name only—did much poorer than expected in the Netherlands’ parliamentary election according to an exit poll. Prime Minister Mark Rutte and his center-right party will likely win the election, though they will lose seats.

Still, Wilders’s loss is good news for those concerned about the rise of the global alt-right—and who are increasingly concerned about upcoming elections in France and Germany. For now, at least, Trump’s election—and the chaos that has followed—may have spooked voters into supporting more traditional political parties.