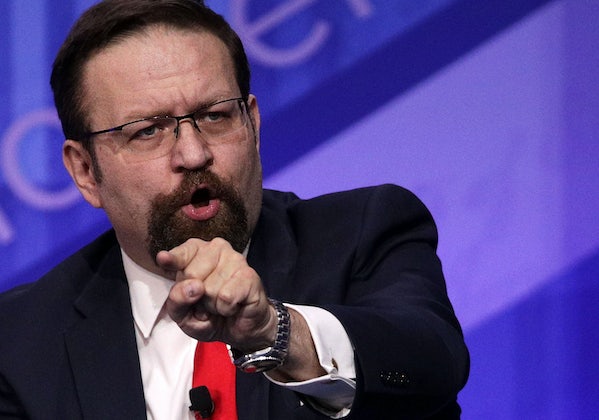 Donald Trump might have a member of a Nazi-allied group in his White House.

Sebastian Gorka, the president’s chief counter-terrorism adviser, is already known to have murky ties to the nationalist right of Hungary, the native land of his parents and where he resided for many years. But an explosive report in The Forward makes it clear that Gorka’s Hungarian political connections could cost him his job and even his American citizenship.

The Vitézi Rend, an elite nationalist and racist order with a history of collaborating with Nazism, claims that Gorka is a sworn member to their group. Founded in 1920 and closely allied with the Hungarian dictator Miklós Horthy, the Vitézi Rend actively participated in rounding up Jews during the Second World War. Gorka refused to respond to The Forward’s request to respond to their findings.

If Gorka is a member of Vitézi Rend, then his status as an American citizen is at risk. Born in England, Gorka became a naturalized American citizen in 2012. As part of his immigration process, he would have been required to disclose membership to any totalitarian-affiliated group. With all their rhetoric about the need to properly vet immigrants, the Trump administration might want to look closer to home.

Update: Gorka, who had refused to answer queries from The Forward, did respond to questions from The Tablet, saying, “I have never been a member of the Vitez Rend.”