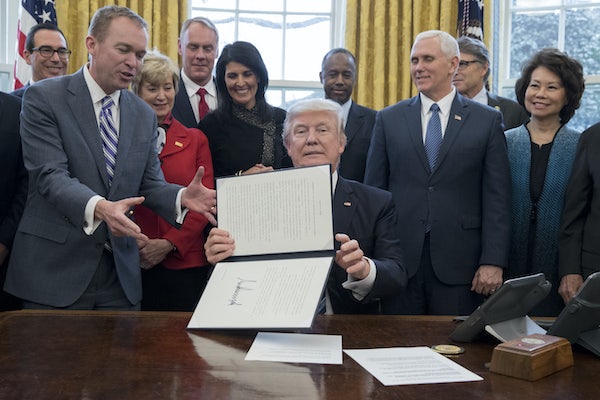 Donald Trump’s budget is nostalgic and deeply destructive—and it will backfire.

The Trump administration unveiled its budget on Thursday and the result, though expected, is horrific. The budget cuts funding for housing and heating for the poor; it eliminates the National Endowment for the Arts and the Corporation for Public Broadcasting; Meals on Wheels and money for before- and after-school programs for children are eliminated; the Chemical Safety Board, which helps mitigate disasters like the BP oil spill, is also axed, along with other programs intended to combat climate change; the Appalachian Regional Commission and the Minority Business Development Agency, which promote economic growth in Appalachia and small business owned by minorities, respectively, are both axed; the budget also increases the costs for bankruptcy protection.

The budget features huge and devastating cuts to HUD and the Departments of Education, State, Agriculture,Commerce, Health and Human Services, Transportation, and Labor—most of which are cut by over 15 percent. All of these cuts go to pay for huge increases in spending in Defense, Homeland Security, and Veterans Affairs.

As Matt Yglesias points out, this is a deeply nostalgic budget and one with an extremely poor understanding of history. Trump’s vision of the economy superficially resembles that of the midcentury, but without any of the things that made that economy special, particularly investment in the future. This budget, moreover, is devastating for anyone not in the top 1 percent. It will have huge economic, cultural, and social ramifications for millions of Americans and it will markedly make their lives much worse.

This budget essentially codifies Trump’s war on the liberal state—coupled with his spree of deregulation, it’s a huge victory for private corporations and a huge loss for anyone who relies on the state in any way for food, shelter, education, or funding. The budget, in other words, benefits very few people and hurts a substantial portion of the country. Politically speaking, it follows the Trump administration’s larger strategy of fighting on multiple fronts at the same time—and this budget is so destructive across so many different areas that Trump’s opponents may struggle to keep up.

But there are also signs that it may backfire. This is a radical budget in nearly every way, and it will have huge repercussions not only for Trump’s opponents but for many of his voters as well. Older voters may like the nostalgia, but as with Trumpcare, many programs they rely on are on the chopping block—same goes for Trump’s voters in rural America. Perhaps most importantly, this is yet another manifestation of the fact that Trump is governing like a far-right Republican, whose main interest is in promoting the interests of the richest Americans at the expense of everyone else.

While his voters may cheer for cuts to some of these programs, which are seen as being manifestations of the liberal bureaucratic state that they despise, there is nothing here to suggest that Trump is embracing a populist economic policy. Trump and his cronies will try to play up the military spending as proof that they are making America Great Again, but the effects of this budget will reverberate around the country—and may very well backfire, as Trumpcare already has.