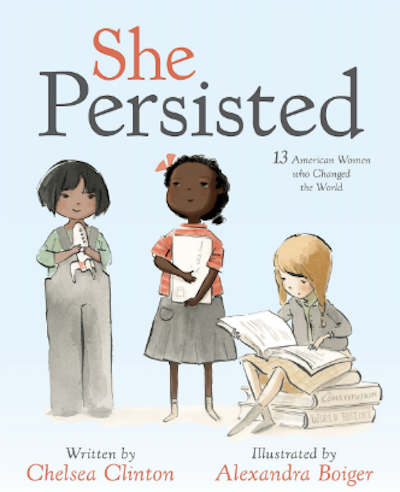 Chelsea Clinton is cashing in on Elizabeth Warren’s persistence.

Clinton, arguably America’s dullest beneficiary of nepotism, announced on Thursday that she is publishing a new children’s book She Persisted about 13 women “who overcame immense opposition to achieve their goals.” Here’s Entertainment Weekly’s press release:

“I wrote this book for everyone who’s ever wanted to speak up but has been told to quiet down, for everyone who’s ever been made to feel less than,” said Clinton, the author of It’s Your World: Get Informed, Get Inspired & Get Going, in a statement. “The 13 women in She Persisted all overcame adversity to help shape our country—sometimes through speaking out, sometimes by staying seated, sometimes by captivating an audience. With this book, I want to send a message to young readers around the country—and the world—that persistence is power.”

That’s an important message! But She Persisted is a deeply strange project, to put it mildly—“biopathological” is maybe one way to describe it. Chelsea Clinton was not the person who was silenced by Mitch McConnell on the Senate floor, and if the mystery cameo is from Hillary Clinton and not Elizabeth Warren—who was the actual person who persisted!—then this project only becomes weirder. Regardless, this book’s profile will be raised by Warren’s speech and Clinton’s election defeat, neither of which really have to do with Chelsea Clinton.

For now this seems like a fairly craven way of raising Chelsea Clinton’s profile by framing what would otherwise be a fine children’s book with something inspirational that somebody else, who is not involved in the project, did. It also signals the death knell for “Nevertheless, she persisted,” which has gone from inspirational to refrigerator magnet.

I’ve reached out to Penguin to ask about Warren’s involvement and whether or not any of the proceeds from the book will be donated to charity.