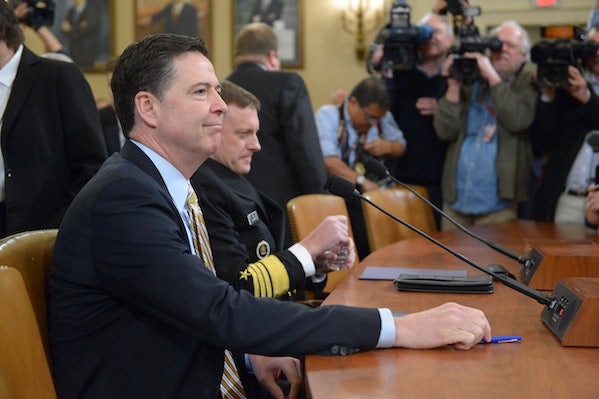 Donald Trump spent this morning ranting on Twitter that the stories about his campaign’s contact with Russian intelligence was “fake news.” But Comey dropped a bomb in his opening statement at today’s hearing on Russian meddling in the 2016 election, revealing that the FBI is investigating the relationship between Trump’s campaign and the Russian government.

Comey indicated that he would not reveal much more about the investigation than that it is ongoing, which is certainly frustrating to anyone who has spent more than six seconds thinking about his election-changing interference in the 2016 election. But it’s also bad news for Donald Trump—perhaps worse news than if Comey decided to run his mouth. As Benjamin Wittes wrote in a sharp piece at Lawfare, relative silence from Comey is not good for Trump:

We know, both from the hospital room testimony and from the Clinton email testimony, how Comey behaves when he feels at liberty to speak. We also know he’s angry right now and would presumably love a chance to defend the integrity of his agency and his agents. If he passes up that opportunity, I will read that as a sign that he is biting his lip very hard because there’s something more important at stake.

This may be the worst-case scenario for Trump. Comey won’t be making a ton of news today, but that just means that the dripping of news will continue—and, most importantly, he may make it later. Devin Nunes began the hearing by making the only rock-solid counterargument that Republicans have: that Russians did not literally hack the vote. Unfortunately for Nunes and for Trump, no one credible is making that case. Trump’s opponents should be very skeptical of Comey—and still shouldn’t hold out hope that a smoking gun will emerge showing collusion between the Trump campaign and the Kremlin—but the Russia story isn’t going away.