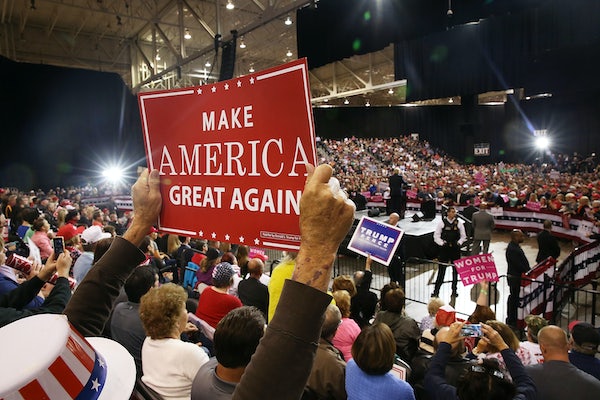 In a piece for New York magazine, Frank Rich argues that the Democratic Party shouldn’t bother with “sympathy” for white working class Americans who voted for Donald Trump. Better surrender them to the loving death grip of the GOP, he argues, while blaming everyone from Nicholas Kristof to J.D. Vance for a misguided post-election emphasis on these voters.

Rich’s fixation on the conservative Vance is particularly strange. Vance, he writes, has become “his people’s explainer-in-chief, the Ta-Nehisi Coates, if you will, of White Lives Matter.” He compares sections of Vance’s flawed memoir, Hillbilly Elegy, to the film Moonlight. Elegy applies respectability politics to a mythically monolithic Appalachia; Moonlight is the survival story of a gay black man. These stories bear little to no resemblance to each other. But Rich similarly compares something he terms “Hillbilly Chic” to “white elites in Manhattan then fawning over black militants” in the 1970s. Something deeper and grimmer than classism is at work in this piece.

Perhaps this is why Rich fundamentally misunderstands the argument for a more populist Democratic Party. It’s not about “feeling sympathy” for poor whites. Emotion is not a substitute for politics. You do not have to feel a certain way toward a certain population to promote policies that will benefit them. Those policies aren’t about them, per se. Poor whites are part of the progressive political project because they are part of society; they matter no more and no less than anyone else in it.

This is an ideology Rich seems to reject. He justifies his perspective by arguing that Republican voters are simply too antagonistic to Big Scary Government to ever vote for Democrats. But there is reason to think that Democrats can win some of these voters (after all, they have done so in the past) and that they can do it without rejecting social liberalism. Pew Research Center reported in January that 52 percent of Republican voters making under $30,000 a year agree that it is the government’s responsibility to ensure access to health care; the same poll showed they are far likelier than wealthy Republicans to do so. Their support for accessible health care is also on the rise: Last March, Pew’s figure for the same demographic stood at only 31 percent. And as Vox’s Jeff Stein reported last week, a new Roosevelt Institute study provides interesting evidence that Michigan Trump voters are mostly open to populist Democrats. There’s a shift underway, and it could benefit Democrats.

But not if Democrats listen to the likes of Frank Rich, who would abandon these voters. “If [Trump’s] administration crashes into an iceberg, leaving his base trapped in America’s steerage with no lifeboats, those who survive may at last be ready to burst out of their own bubble and listen to an alternative,” he concludes. They may suffer, they may even die, but at least they’ll finally listen—this is an acceptable resolution to Frank Rich. It shouldn’t be acceptable to anyone else.