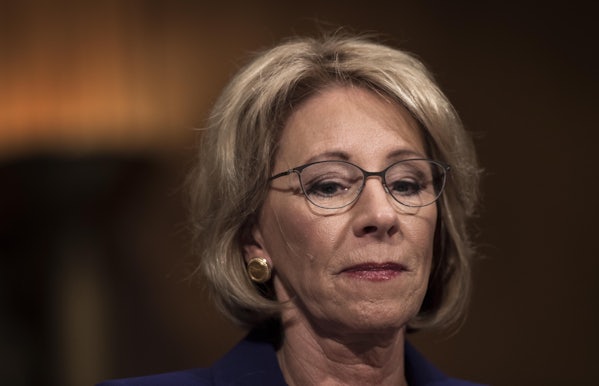 Betsy DeVos is under fire for an apparent conflict of interest.

The education secretary announced last week that she’s reversing Obama-era limits on fees that Americans pay for defaulting on federal student loans. As Bloomberg reported on Monday, the move is raising eyebrows because it stands to benefit the father of a key DeVos advisor—an aide who just happened to resign from the Education Department a day after this change was announced.

“The reversal is almost certain to hand United Student Aid Funds Inc., the nation’s largest guaranty agency, a victory in its two-year legal battle against her department,” Bloomberg’s Shahien Nasiripour explained. “The fees could translate into an additional $15 million in annual revenue for the company, filings in a related lawsuit suggest. Until Jan. 1, United Student Aid Funds was led by Bill Hansen, who served as Deputy Secretary of Education under President George W. Bush. His son, Taylor Hansen, a former for-profit college lobbyist, was until three days ago one of the few DeVos advisers with professional experience in higher education.”

Nasiripour couldn’t reach Taylor Hansen for comment, but Massachusetts Senator Elizabeth Warren told him there’s “no question” this was a conflict of interest. The Washington Post reported that Warren sent a letter to DeVos on Friday questioning the hiring of Hansen and another official with ties to for-profit colleges.