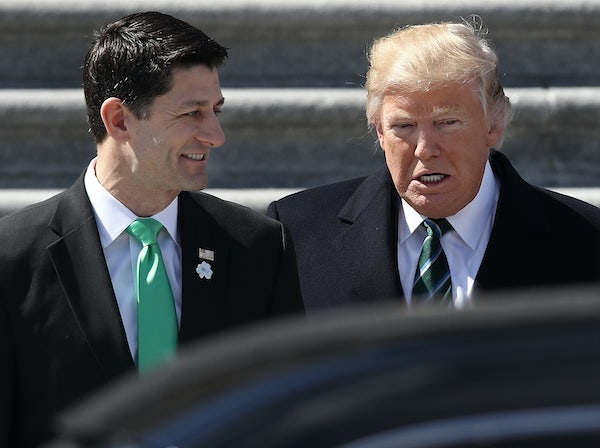 The “sweeteners” added to Trumpcare at the eleventh hour aren’t so sweet.

The AHCA is a plane being built in midair. While Paul Ryan tried to act as if the bill was a finished product when it was unveiled two weeks ago, it was immediately clear that it was both inadequate and incredibly destructive. Since then, a number of fictional timelines and “prongs” have been thrown out to make it seem as if the bill won’t actually kick 24 million people out of the health insurance market in a decade. It’s easy to see why some Republicans are getting cold feet. But there’s another problem, too: Some Republicans don’t think the bill is harsh enough. The Freedom Caucus in the House and Rand Paul, Ted Cruz, and Mike Lee in the Senate all want a more draconian, market-oriented bill.

Late Monday night, the American Health Care Act was revised to include a number of line items to try to win over the Freedom Caucus, New York Republicans, and the hardline conservatives in the Senate. But all of these items ultimately make the bill even less likely to pass the Senate, even if they may ease the bill’s passage through the House. These revisions have been described as “sweeteners,” but they’re anything but. The revised bill is a disaster for Medicaid, even more so than the original bill. It moves up the expiration date by which states could take up the Medicaid expansion. It adds optional work requirements and block granting, both of which would effectively end Medicaid as we know it and create a public health disaster. (Only a small number of people receiving Medicaid—less than 15 percent—are able to work, and most of those are caring for a sick or disabled family member.)

There are increased tax credits for Americans between the ages of 55 and 64, who would be hardest hit by the AHCA. Except at this point the amendment is both toothless and terrible. Here’s Politico: “The amendment would not set up the tax credits but would instruct the Senate to do so, forcing House Republicans to take a vote on something the upper chamber would do later. It would be paid for by allowing consumers to write off less medical debt.” In other words, the Senate would have to figure out how to do it, and it would be paid for by kneecapping sick people.

The bill is especially engineered to win over New York Republicans. Per The New York Times:

The move—one of a number of late changes designed to gain more votes—would affect New York State only. It could save county governments outside of New York City $2.3 billion a year. But it could shift costs to state taxpayers or deny New York that same total in matching federal aid if the state continues to require those counties to contribute to the cost of Medicaid. Upstate New York Republicans, backed by local government officials, pressed for the measure over the angry opposition of New York’s Democratic governor, Andrew M. Cuomo.

Medicaid is partially paid for in many counties by property taxes, and this shift would allow counties to drastically reduce those taxes, which also pay for schools. It would also tie up the state’s budget and likely increase obligations—and decrease services—for downstate residents.

All of these changes may entice some votes. The New York delegation is a big one! Passing off the problem of 55-to-64-year-olds to the Senate is shady but possibly effective! But they will make the bill harder to pass in the Senate. Yes, there are hardliners there, too. But there are also plenty of moderates who don’t want to see drastic changes to Medicaid, like Susan Collins and Lisa Murkowski. It only takes three defectors to kill the bill in the upper chamber. Worst of all, for Ryan and Trump, is the fact that these regressive and destructive alterations still don’t seem to have the support of the Freedom Caucus.