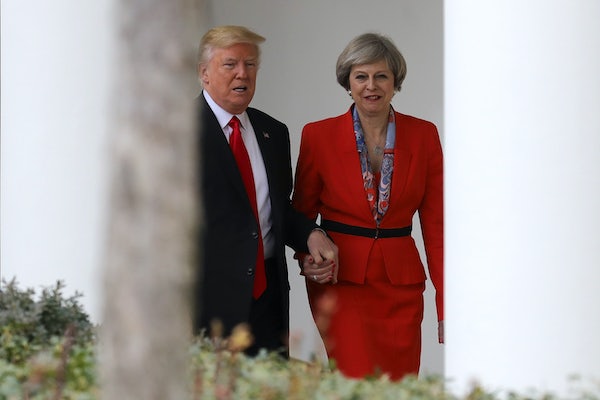 Trump is making the “special relationship” with Britain really awkward.

Former Prime Minister David Cameron didn’t seem frustrated when he addressed the issue later in the day, but he did tweak Trump in a speech at Brown University in Rhode Island. Being out of office now, Cameron said, “I don’t have to listen any more to the wiretaps of Donald Trump’s conversations.”

“Just to be clear, that’s a joke,” he added, according to The Providence Journal.

This wasn’t the only awkward moment for Britain and the United States since Trump took office. In January, in a joint press conference with British Prime Minister Theresa May at the White House, Trump responded to a tough question from a BBC reporter by joking, “There goes that relationship.” The press also made hay of his decision to hold hands with May as they walked outside the White House.

In a Vogue profile published on Monday, May laughed it off. She said Trump “was actually being a gentleman,” adding, “We were about to walk down a ramp, and he said it might be a bit awkward.” When Vogue asked if May had confronted Trump about his comments on “women,” which she had previously called “unacceptable,” the prime minister was more serious:

We don’t comment on private conversations that take place. All I would say is, I’ve been very clear: I’m not afraid to raise issues. And the nature of the relationship is such that we should be able to be frank and open with each other.

That’s Rogers’s hope, too. Even as he acknowledged the damage done by the White House’s wiretapping claim, he told Congress, “I think our relationship is strong enough to handle this.”