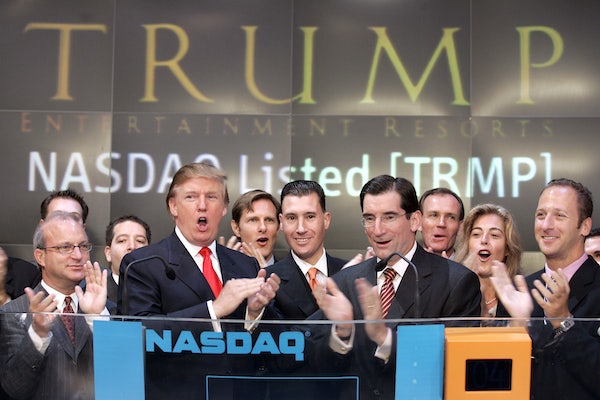 That’s tempting to do, even though the stock market is only a rough measurement of how the economy is doing as a whole. (It also pretty much only benefits the very rich at this point, since most middle-class people had their stocks wiped out during the 2008 crash and haven’t re-entered the market.) In fact, the stock market was soaring on the expectation of things that Trump would do—deregulation, tax reform—not things he had already done. Now that he is getting stuck in the quagmire of health care reform, the market is dipping.

On Tuesday, the S&P 500 fell by 1 percent for the first time since the fall. Stocks slumped as it became more likely that failure to pass health care reform would imperil the rest of Trump’s agenda. Investors are coming around to what others have already known—that Trump is an almost unthinkably incompetent executive who can’t help but get in his own way. There are also signs that Trump’s tax cut, if it comes, will be “later and smaller” than expected, per The Wall Street Journal.

Every president touts market performance as proof that they’re doing a good job, even though it’s usually a pretty silly thing to do. But Trump is doing it more out of desperation than anything else—it’s literally the only thing that suggests he might not be doing a historically terrible job. On February 23, for instance, Treasury Secretary Steven Mnuchin said the stock market is “absolutely” a “report card” for the administration.

On Tuesday, however, Sean Spicer tried to argue that it was unfair to use the stock market as a measure of Trump’s performance. But it’s too late to make that case! The Trump administration has already set up short-term swings in the stock market as a metric to judge his presidency. And Tuesday’s downturn was absolutely reflective of Trump’s performance: Sixty days into his first term, even the hyper-rich, the last group to stand by Trump, seem to be getting pessimistic.