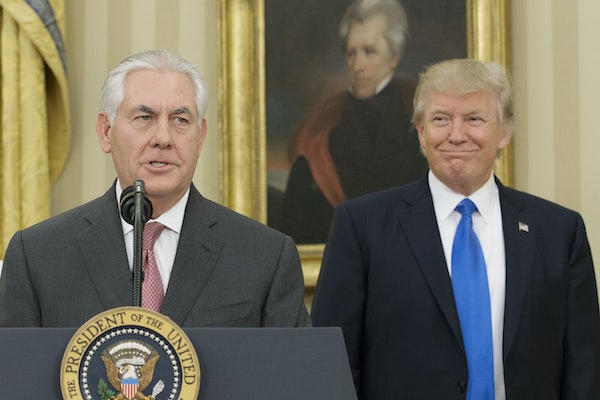 The secretary of state sparked a media firestorm last week by allowing only one journalist, from the conservative Independent Journal Review, to join him on his first major diplomatic trip to Asia. The reporter, McPike, added to the controversy when she announced she would not produce regular reports on Tillerson’s official activities, saying her editors favored of a “longer piece” about the five-day trip.

McPike’s piece has now been published. There are a few revelations: Tillerson hasn’t yet spoken to President Donald Trump about what the State Department would look like under the president’s proposal to slash the agency by 28 percent. He also revealed that he didn’t want to be secretary of state; his wife pushed him to take the job. McPike covers Tillerson’s aversion to media access, but uncritically for the most part, suggesting that secrecy is part of Trump’s diplomatic strategy and that Tillerson is merely “uncomfortable” with being in the spotlight. The report doesn’t consider the possibility that the administration is hostile to transparency.

The biggest problem with the piece, though, is that it allows the administration to claim transparency while providing very little substance about how Tillerson plans to handle foreign policy issues. McPike could only do so much, given her expertise; she’s a beat reporter at the White House, not the State Department. But given her decision not to file pool reports, and her past claims that “being adversarial is a problem” in journalism, it’s no wonder that Tillerson chose to grant her exclusive access.

McPike hasn’t been particularly forceful in her own defense. In addition to the above tweet, she told MSNBC’s Morning Joe on Tuesday, “Sometimes you have to make a decision and go ahead with it.” Meanwhile, that decision has irked seasoned State Department reporters who have been attempting to ask Tillerson questions for nearly two months, to no avail. As former Republican National Committee Chairman Michael Steele pointed out during the same Morning Joe panel, this kind of media infighting is exactly what the president wants—an example, in the The Daily Beast’s words, of Trump’s “divide-and-conquer strategy regarding the Fourth Estate.”