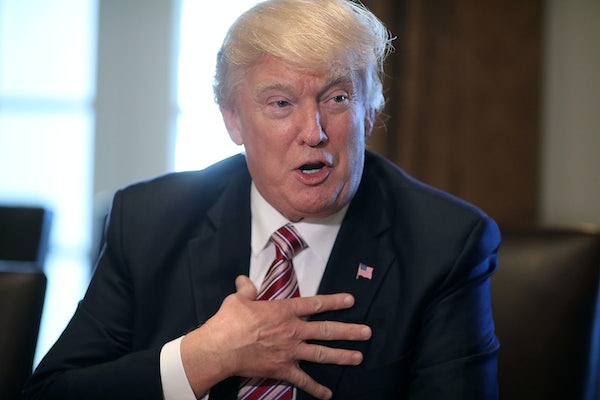 Time has a fascinating interview with Trump about his use of lies, falsehoods, untruths, and exaggerations, especially on Twitter. (It’s part of an interesting and sober feature on the same subject.) The interview is a window into Trump’s brain and the result is more or less what you’d expect—Trump is essentially convinced that he can shape reality by tweeting it. He freely admits, for instance, that many of his tweets are simple speculation and proudly tells Time’s Michael Scherer that he has been proven right again and again. Trump does not seem to realize that, as president, his “predictions” provide powerful incentives to people to provide corroborating information—like Devin Nunes, who brought Trump “evidence” that he was surveilled by the Obama administration, even though this had nothing to do with Trump’s original claim, on Twitter, that he was “wiretapped.”

When Trump is proven to be completely wrong—as was the case with his claims that Ted Cruz’s father was with Lee Harvey Oswald before the Kennedy assassination, or that the United States had used British intelligence to spy on his campaign—he shrugs it off, saying that he was merely citing someone else’s claim in a neutral way. (This is not true in either of these cases.) But for the most part, Trump insists that he is actually right about everything. Here he is on his widely and deservedly mocked claim that there was a terrorist attack in Sweden the day before a rally he held in February:

No I am saying I was right. I am talking about Sweden. I’m talking about what Sweden has done to themselves is very sad, that is what I am talking about. That is what I am talking about. You can phrase it any way you want. A day later they had a horrible, horrible riot in Sweden and you saw what happened. I talked about Brussels. I was on the front page of the New York Times for my quote. I said Brussels is not what it used to be, very sad what has happened to Brussels. I was absolutely lambasted. A short time later they had the major attack in Brussels. One year ago today. Exactly one year ago today. And then people said you know Trump was right. What am I going to tell you? I tend to be right. I’m an instinctual person, I happen to be a person that knows how life works. I said I was going to win the election, I won the election, in fact I was number one the entire route, in the primaries, from the day I announced, I was number one. And the New York Times and CNN and all of them, they did these polls, which were extremely bad and they turned out to be totally wrong, and my polls showed I was going to win. We thought we were going to win the night of the election.

The most telling part of the interview comes at the very end. Before signing off, Trump says, “Hey look, in the mean time, I guess, I can’t be doing so badly, because I’m president, and you’re not.” It’s a very Trump-ian joke. After Trump’s surprise victory many worried about its effects on his psyche—no one thought he could win and he did win, which could only suggest to a narcissist like Trump that he is right and everyone else is wrong. More significantly, this is Trump’s version of “When the president does it, that means that it is not illegal”—in this case, it’s “If the president says it, that means that it is not a lie.”