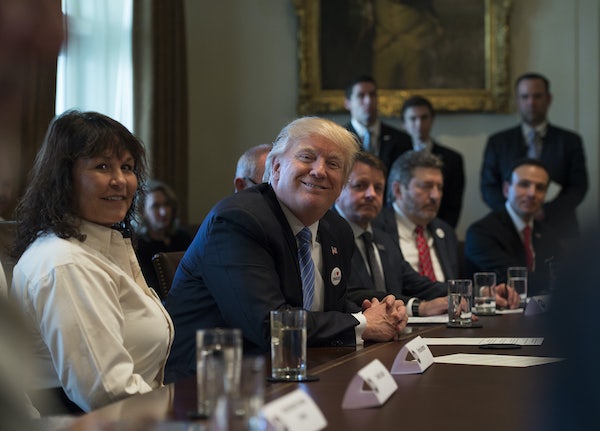 Donald Trump does not seem to mind if Trumpcare goes down in flames.

Trump took to Twitter this morning for some last-minute whipping—including this snide shot at the Freedom Caucus.

But Trump’s main pitch still seems halfhearted, especially coming from someone who the right-wing press loves to breathlessly point out is a “marketer.” This is how you sell a $49.99 watch on the Home Shopping Network, not a health care plan that less than a third of Americans think is a good idea:

But even Trump’s more forceful pitch—his, “I thought you guys were against abortion?” quip at the Freedom Caucus—suggests someone who doesn’t really care about the fate of this bill. The abortion language in the bill wouldn’t make it through the Senate and almost certainly violates the Byrd Rule, i.e. it doesn’t meet the standard for passing the bill through the filibuster-proof reconciliation process. Every member of the Freedom Caucus must know that voting for the AHCA because of its anti-abortion language is folly.

Perhaps the weirdest development of the past few days is the fact that it’s become abundantly clear that Trump doesn’t seem to care if this bill lives or dies. The fact that 24 million could end up without health insurance is totally abstract to him. He’s barely been involved in selling the bill to Congress, and Mitch McConnell was reportedly leading the negotiations with the Freedom Caucus and others. (McConnell apparently thinks he can rewrite the bill to his liking as long as it gets past the first hurdle of the House.) When it became clear that Paul Ryan didn’t have the votes, Trump was literally playing with a truck—a reporter had to tell him that the bill wasn’t going to get a vote on Thursday.

Trump seems to know that he screwed up. Late Thursday The New York Times reported that Trump “has told four people close to him that he regrets going along with Speaker Paul D. Ryan’s plan to push a health care overhaul before unveiling a tax cut proposal more politically palatable to Republicans.” This seems genuine, though it also hints at where this story is going: Paul Ryan will be blamed for the bill’s failure when it fails.

I should say if it fails. Either way, the White House doesn’t seem to care. In fact, losing may be the outcome that they want. Steve Bannon reportedly hates the bill because it doesn’t “drive down costs.” Others in the White House seem ready to move on, and have begun spinning this as if it’s a good thing:

This bill has been out for 19 days. And if Trump thinks he can walk away from this unscathed, he’s kidding himself.