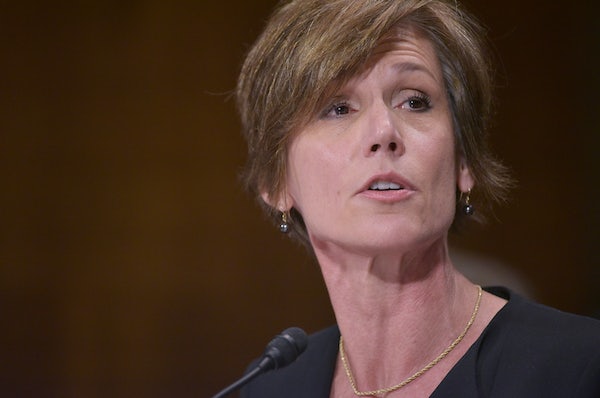 The White House sure looks like it’s doing a cover-up of the Russia story.

Citing executive communication privilege, officials from the Trump administration tried to prevent former acting Attorney General Sally Yates from testifying before the House Intelligence Committee about connections between the Trump campaign and Russia, according to the Washington Post. Yates, who informed the White House that former National Security Adviser Michael Flynn had lied to the press and Mike Pence about the nature of his conversations with the Russian ambassador during the transition, was fired in February after declining to defend the Trump administration’s travel ban.

The Department of Justice has advised that it believes there are further constraints on the testimony Ms. Yates may provide at the [House intelligence committee] hearing. Generally, we understand that the department takes the position that all information Ms. Yates received or actions she took in her capacity as Deputy Attorney General and acting Attorney General are client confidences that she may not disclose absent written consent of the department.

We believe that the department’s position in this regard is overbroad, incorrect, and inconsistent with the department’s historical approach to the congressional testimony of current and former officials. In particular, we believe that Ms. Yates should not be obligated to refuse to provide non-classified facts about the department’s notification to the White House of concerns about the conduct of a senior official. Requiring Ms. Yates to refuse to provide such information is particularly untenable given that multiple senior administration officials have publicly described the same events.’

It’s clear that the White House is trying to use executive privilege to block Yates from saying anything at all about her time as acting attorney general—a time in which she informed Trump that his very own national security adviser had lied to the administration about his contacts with an official representing a foreign government. Yates apparently informed the House Intelligence Committee on Friday that she intended to present it with information regarding Michael Flynn. Devin Nunes, the committee’s chair who is in hot water himself for being shady as hell, canceled the hearing the next day.

At the very least, this is the latest in a long line of examples of the Trump administration appearing to cover up ties between the Trump campaign and Russia. It’s still unclear if it is merely trying to cover up the appearance of complicity and wrongdoing, or if there’s something more serious going on.

The administration’s willingness to use executive privilege here is notable insofar as it suggests that it is taking the Russia-Trump story extremely seriously and wants to do everything it can to block it. This is, of course, what administrations do. But given the scope of this story—which now involves Donald Trump, Michael Flynn, Devin Nunes, Jeff Sessions, and Jared Kushner (and that’s only people who served in the administration!)—it’s increasingly clear that an independent commission is necessary. What’s ironic is that the Trump administration’s behavior only makes that commission more likely.