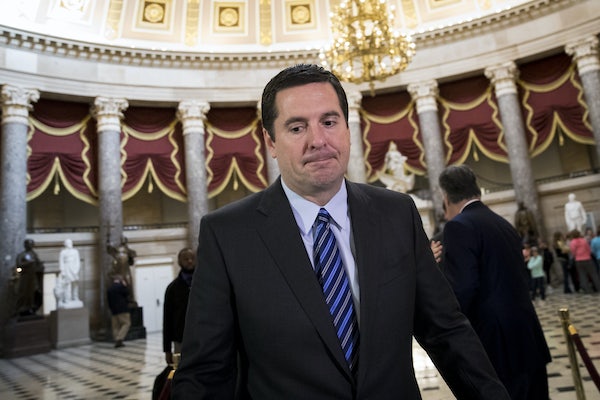 Devin Nunes’s defense of Trump might lead to an ethics investigation.

At a press conference last Tuesday Nunes, the chairman of the House Intelligence Committee, said, “First, I recently confirmed that on numerous occasions, the intelligence community incidentally collected information about U.S. citizens involved in the Trump transition. Details about persons associated with the incoming administration, details with little apparent foreign intelligence value, were widely disseminated in intelligence community reporting. Third, I have confirmed that additional names of Trump transition team members were unmasked. And fourth and finally, I want to be clear, none of this surveillance was related to Russia, or the investigation of Russian activities, or of the Trump team.”

These words, and follow-up comments in which Nunes confirmed the existence of foreign surveillance warrants, revealed classified information. As such, they seem to put Nunes at odds with the rules of the House Intelligence Committee. Citing legal experts, the Daily Beast notes that Nunes might have run afoul of rules stating, “The Committee on Ethics shall investigate any unauthorized disclosure of intelligence or intelligence-related information.”

If Nunes does in fact have to answer to an investigation, that could intensify the push from members of both parties to have him recuse himself from the investigation into the Trump campaign’s possible collusion with the Russian government during the last election.