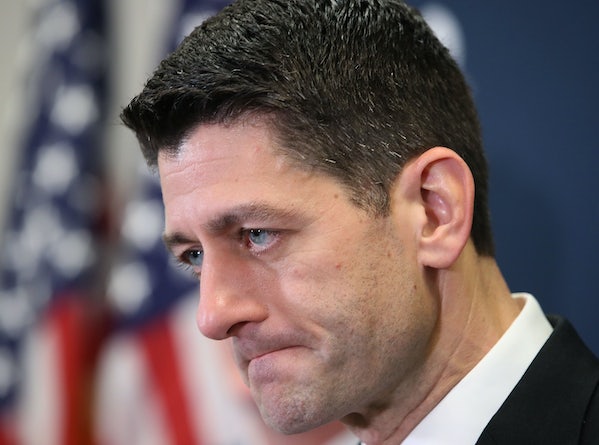 Are House Republicans really gearing up to get clowned on health care again?

Just five days after one of the most embarrassing self-owns in political history, Bloomberg reports that House Republicans are considering holding a vote on repealing Obamacare in only two weeks. Bloomberg says that “members of the conservative House Freedom Caucus, who helped derail the bill, have been talking with some Republican moderate holdouts in an effort to identify changes that could bring them on board with the measure.” One member, Oregon Representative Greg Walden, even joked that it was high time for a political resurrection. “We’re approaching the Easter season,” Walden said. “Some things rise from the dead.”

In sacred texts, yes—but the Capitol is about as far from the Holy Land as you can get. While the whispers that health care isn’t quite dead have been growing louder—I wrote about them yesterday—the probability of House Republicans going through with this plan seems to be slim, especially considering that no one has yet to offer any changes to the American Health Care Act, one of the most hated bills ever.

That Republican House members would be risking failure mere weeks after a colossal blow to their credibility makes this even less plausible. The Associated Press reported yesterday that Mitch McConnell and Senate Republicans are moving on: “It’s pretty obvious we were not able, in the House, to pass a replacement. Our Democratic friends ought to be pretty happy about that because we have the existing law in place, and I think we’re just going to have to see how that works out,” McConnell said on Tuesday. “We believe it will not work out well, but we’ll see.”

These should not be comforting words to House Republicans who wish to hold a vote. It’s possible that the point is to send a bad bill up to the Senate, where it will die. This would kill two birds—the bill and the ability to claim that the House passed a repeal bill—with one stone.

But that is a 4D chess explanation, which does not fit the blundering political maneuvering that we’ve seen from House Republicans. (If this was the plan, moreover, House Republicans would have passed the AHCA last week.) More likely than not, they are using this as an opportunity to quiet raging donors who are furious that they botched health care reform. “If both the Freedom Caucus and the Tuesday Group can agree on some things, then we’re in good shape,” Representative Morgan Griffiths told Bloomberg. That tells you pretty much all you need to know about the status of the bill—it will require hardliners and so-called moderates to come together and, from what we’ve seen over the past month, that’s not going to happen.