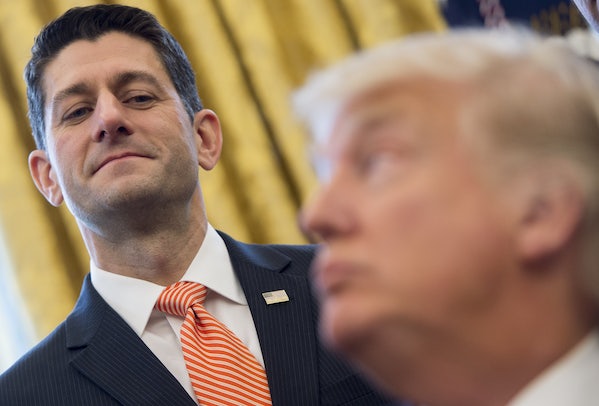 The party of the president almost always loses seats in the midterm but one historical analysis published over the weekend suggests that Republicans may be facing a looming catastrophe. Assessing Trump’s war with the House Freedom Caucus over his failed healthcare bill, Cook Political Report editor Amy Walter notes that this conflict imperils vulnerable Republican incumbents:

The more the GOP gets bogged down in process instead of progress, the more likely it is that their voters become disillusioned and that independent voters abandon them. Combine these ingredients with an energized Democratic base and you have all the ingredients for a disastrous midterm election in 2018 for the GOP.

Walter, channeling Archer, explains that Trump is “flirting very close to the danger zone territory” of historic indicators of midterm failure. When presidents lose one or both houses of Congress, their approval ratings tend to be below 85 percent within their own parties and below the mid-40s with independents. Trump is now just a few points away from this milestone.

“Moreover,” Walter notes, “there’s also empirical evidence that Democrats are more energized in their dislike of Trump than Republicans are in their support of him.” That’s true of independents as well, and an angry opposition is one that’s much more likely to turn out at the polls.

It’s not as though there are many political victories on the horizon for Trump either. Sure, Neil Gorsuch will likely be confirmed to the Supreme Court soon—maybe even this week—but the White House’s big pivot to tax reform could prove as politically problematic as its healthcare effort. The ongoing Russia investigation will continue taking its toll.

It’s still very early, of course—the midterm elections are nineteen long months away. But there’s real reason to believe 2018 could be worse than expected for Republicans. “Trump’s numbers now look more like those of a president who is about to be hit by a wave election that wipes his party out of power in the House, than one who is going to be able to ride a wave of success,” Walter writes.