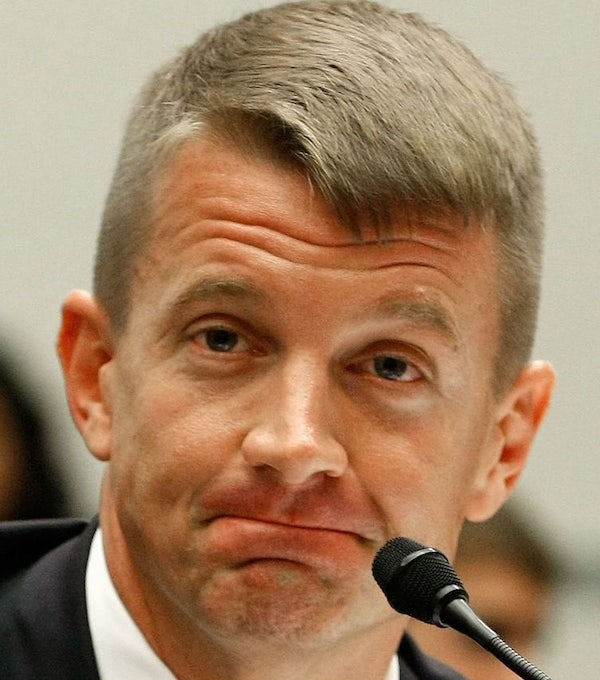 The founder of Blackwater is now part of the Trump-Russia story because of course he is.

The Washington Post reports that Erik Prince, the brother of Education Secretary Betsy DeVos and the founder of the disgraced mercenary empire Blackwater, met a “Russian close to President Vladimir Putin” on January 11 in an attempt to set up a back channel between Donald Trump and Putin. The meeting took place in the tiny archipelago nation of Seychelles and was allegedly brokered by the United Arab Emirates. Although a spokesman for Prince admitted that a meeting took place, the spokesman also called the report a “complete fabrication.” (How it could be a “complete fabrication” if a meeting did, in fact, occur is unclear.)

Sean Spicer meanwhile issued a classic non-denial denial. “We are not aware of any meetings and Erik Prince had no role in the transition,” said Spicer, the least credible person in Washington, whose statements are regularly proven false. It’s true that Prince had no official role in the transition but only a few days after the alleged meeting took place, Jeremy Scahill, who wrote a book on Blackwater, reported that Prince was informally advising Trump. “Prince clearly views Trump’s vow to bring back torture, CIA-sponsored kidnapping, and enhanced interrogations, as well as his commitment to fill Guantánamo with prisoners, as a golden opportunity to ascend to his rightful place as a covert private warrior for the U.S. national security state,” Scahill wrote. Prince has ties to DeVos, obviously, but is also close to Steve Bannon.

The Post report is vague: We don’t know what role, if any, the “Russian close to President Vladimir Putin” has in the Russian government or security apparatus. We don’t know why they were meeting, or, relatedly, what the back channel they were establishing was for. But the fact that a back channel was seen as being necessary in the first place seems damning enough, especially considering that the meeting took place only nine days before Trump’s inauguration and less than two weeks after Michael Flynn reportedly discussed U.S. sanctions against Russia with the Russian ambassador.

Seychelles appears to be embarrassed by the story—but only because it has damaged its reputation as a place for shadowy secret meetings. “I wouldn’t be surprised at all,” Barry Faure, the Seychelles delightful-seeming secretary of state for foreign affairs, told the Post. “The Seychelles is the kind of place where you can have a good time away from the eyes of the media. That’s even printed in our tourism marketing. But I guess this time you smelled something.”