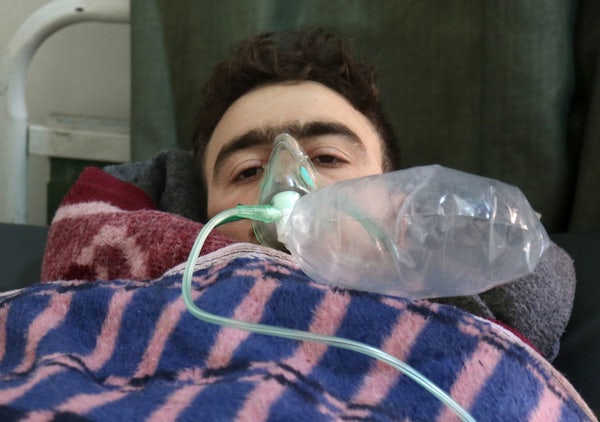 On Tuesday, scores of Syrian civilians—current estimates are as high as 58—died after helicopters dropped poison gas on civilian areas in Khan Sheikhoun, a rebel-held city in Idlib province. The White House blamed Bashar al-Assad and his backers in Moscow and Tehran—and Barack Obama.

“Today’s chemical attack in Syria against innocent people, including women and children, is reprehensible and cannot be ignored by the civilized world,” the president said in a statement. “These heinous actions by the Bashar al-Assad regime are a consequence of the past administration’s weakness and irresolution. President Obama said in 2012 that he would establish a ‘red line’ against the use of chemical weapons and then did nothing. The United States stands with our allies across the globe to condemn this intolerable attack.”

At Tuesday’s press briefing, Sean Spicer also blamed Obama, saying: “President Obama said in 2012 he would establish a red line against the use of chemical weapons and then did nothing.”

Blaming one’s predecessor is a longstanding presidential tradition. But Trump has taken it to new heights by first alleging that Obama “wiretapped” Trump Tower and now blaming Obama for civilian attacks in Syria—which occurred four years after a Russia-U.S. brokered deal to destroy Syria’s chemical weapons in 2013. At the same time, while Assad was slaughtering civilians, Donald Trump was advocating that the U.S. stay out of Syria altogether.

In fact, some are tying the latest gas attack to Rex Tillerson, who said over the weekend that the “longer-term status of President Assad will be decided by the Syrian people”—which could be taken as a suggestion that the U.S. was content to let him stay in power and give him carte blanche militarily.

The fact is that there are no good options in Syria, as Obama knew all too well. Soon enough, Trump will have to own up to that himself.