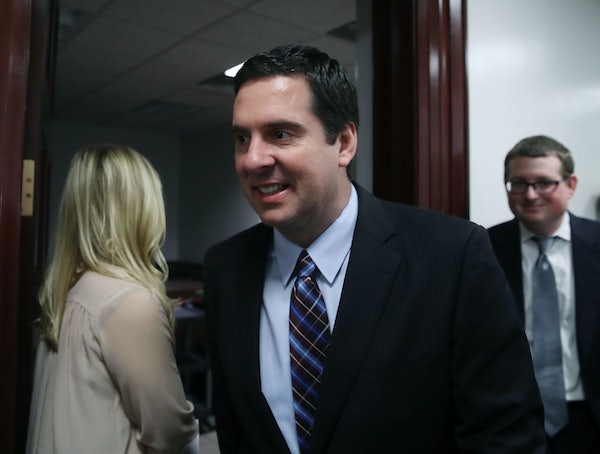 Democrats won’t have Devin Nunes to kick around anymore.

Nunes—living proof that the French accent is what makes Inspector Clouseau funny, not the idiocy and incompetence—made the surprise announcement on Thursday that he was stepping down from the House Intelligence Committee’s investigation into Russian meddling in the 2016 election. He is doing so because he is now under investigation by the House Ethics Committee for improperly sharing intelligence information, but also because he is terrible.

Nunes, you may recall, made an ass of himself and the Intelligence Committee’s investigation when he conducted what may have been the most misguided press conference in recent history, all but declaring that he was working with the White House to provide cover for Donald Trump, whose campaign team was suspiciously close to the Russians. With his departure, Nunes’s own goal-ing is now finally complete. “The charges are entirely false and politically motivated, and are being leveled just as the American people are beginning to learn the truth about the improper unmasking of the identities of U.S. citizens and other abuses of power,” Nunes said in a statement. Nunes also claimed that left-wing groups were responsible for filing the ethics complaints against him, but that does not seem to be the case.

This is probably a blessing for Trump and Republicans in Congress. Nunes’s inept handling of the investigation had become a distraction, and now steadier hands seem to be in control. Mike Conway will lead the investigation with assistance from Tom Rooney and Trey Gowdy. Gowdy hasn’t figured out how to cut his hair so his face looks less weird, but he does know his way around a political investigation from his time in the Benghazi trenches. During James Comey and Mike Rogers’s testimony before the Intelligence Committee, Gowdy was the shrewdest Republican, steering the investigation away from the Trump campaign’s alleged collusion with Russia. Instead, he focused on leaks from within the administration, which is the White House’s preferred line.

In other words, the House’s investigation into Russia won’t get more credible. But at least its attempts to change the subject will be less laughably obvious. Furthermore, Nunes’s continued involvement was the strongest argument for an independent investigation. In the end, this is probably bad news for Democrats.