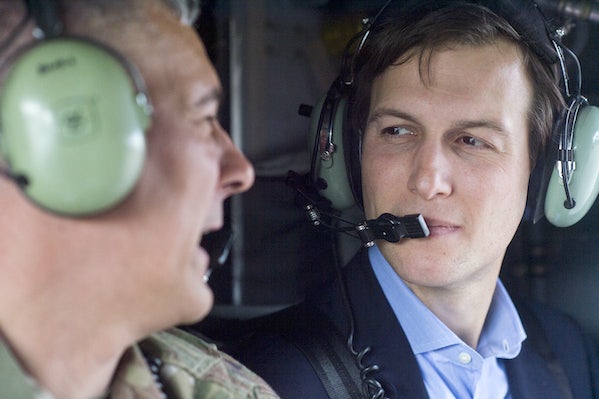 The White House has devolved into a fight in the Breitbart comments section.

During the campaign, Jared Kushner and Steve Bannon were BFFs, spending their days conspiring to bring women who had accused Bill Clinton of sexual assault to presidential debates and their evenings making friendship bracelets (Jared’s reads “civic” and Steve’s reads “nationalism”) and discussing their crushes (Jared’s is Ivanka, Bannon’s is also Ivanka) and taking turns calling each other “daddy.” But once Trump entered the White House—and especially once things started going wrong, which was immediately—Kushner began kneecapping his former friend. In February, he was President Bannon. In April, he’s lost everything he once held dear. (The only thing he holds dear is the National Security Council.) Cementing his reputation as a man of the people, billionaire lunatic Rebekah Mercer had to convince Bannon from quitting his job.

Revenge is Kushner’s thing—it seems to be the only thing that he’s reasonably good at. But his sidelining of Bannon seemed to be opportunistic more than retaliatory (though Kushner does reportedly think that Bannon and the Breitbart Brigade in the White House are “nuts”). He seems to have caught Bannon off guard as well. And now the negative stories are starting to come out. The Daily Beast had what may be the best scoop of the early Trump administration. “[Steve] recently vented to us about Jared being a ‘globalist’ and a ‘cuck’. ... He actually said ‘cuck,’ as in “cuckservative,’” an administration official told The Daily Beast. The official also told the Daily Beast that Bannon had complained that Kushner wanted to “shiv him and push him out the door.”

Until recently, it was rumored that Kushner had been pushing many of the leaks coming out of the White House for the purpose of consolidating power. But now it seems like Bannon is also going to start leaking and elbowing the press to cover things from his vantage point—a leaky administration is about to get a whole lot leakier. On Thursday, Breitbart posted a number of anti-Kushner articles, and Axios Presented By the Chevy Corsair reported that Bannon recently told associates that he “loves a gunfight.” (Bannon has not, to the best of my knowledge, every been in a gunfight, which helps explain why he loves war so much.) “Steve has developed strong and important relationships with some of the most powerful right-leaning business leaders,” a friend of Bannon told Axios. “I see some bad press in [Jared’s] future.”