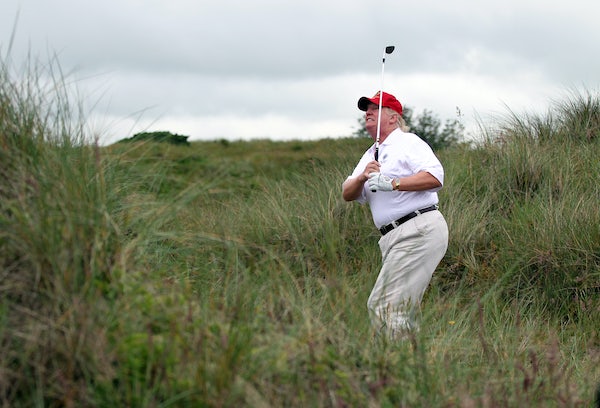 Donald Trump has no strategy, no beliefs, and no principles.

The president’s surprise decision to bomb Syria, after months of declaring far and wide that he would do no such thing, is causing some whiplash. What could have motivated this abrupt change? At The Atlantic, Jeffrey Goldberg argues that Trump has driven a stake through the heart of Obama’s foreign policy playbook:

The events of the past week also prove that a core principle of the Obama Doctrine is dead. President Trump’s governing foreign policy doctrine is not easily discernible, of course. His recent statements about Syria—kaleidoscopic in their diversity—combined with his decision to order an attack, have half-convinced me that he is something wholly unique in the history of the presidency: an isolationist interventionist.

The core of Goldberg’s argument is correct. Like it or hate it, Obama’s foreign policy did reflect discernible principles and Trump’s approach seems uniquely scatterbrained in contrast. But the term “isolationist interventionist” still implies that Trump’s actions are informed by specific political philosophies, and there’s no evidence this is true. Trump doesn’t think in terms like “isolationism v. interventionism.”

Nor is it likely that he had “a change of heart,” as Chris Cillizza suggests at CNN:

There’s no question that some of Trump’s shift is also explained by the massive difference between being a private citizen offering a critique via Twitter and being the president of the United States. The weight of the office changes people.

Trump has no political experience, no record of serious thought on foreign policy. He was for the Iraq invasion before he was against it. He has pledged to decimate ISIS while affecting an isolationist bent. This suggests that he is little more than a narcissistic con man. He lies more often than he tells the truth, and his lies typically serve one purpose: They are meant to make him look good. It is more likely that Trump did what his generals told him to do because he wants to be the sort of person who is respected by generals. It is likely he started caring about dead Syrians because the press suggested that only a monster wouldn’t. He did not bomb Syria because, in the battle between isolationism and interventionism being waged in his soul, the weight of his office tipped the field toward the latter. He’s a simple, vulgar person who makes decisions for simple, vulgar reasons.

To suggest otherwise gives Trump credit he hasn’t earned. There is no strategy. There is no grand plan. There is no moral, ethical, or philosophical calculation. There’s only Trump, and how he feels from one moment to the next.