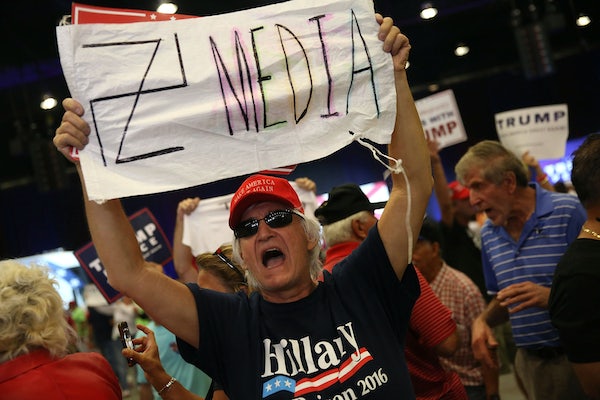 #Bothsides is the most failed, destructive, opportunistic, and falsifiable analytical conceit in American politics.

When President Obama was contemplating missile strikes in Syria four years ago, in the aftermath of a deadly chemical weapons attack, very few people thought it was a good idea. Just 38 percent of Democrats and a bare 22 percent of Republicans supported the idea.

Today, most Democrats are similarly apprehensive. Only 37 percent back President Trump’s weekend bombing campaign. Republicans, by contrast, have had a near-total change of heart. The same Washington Post-ABC News poll finds that 86 percent of Republicans support the strikes, suggesting that a huge number of them based their decision on the proxy of who happened to be president at the time.

Negative partisanship—the observable effect that antipathy to the other party has on public opinion—seems, like everything else in U.S. politics, to be asymmetric between the parties. Republicans are the key drivers of it.

We can see the asymmetry at work in other realms, too. Immediately after the election, Democrats’ views of economic conditions (the current state of the economy and the outlook) fell modestly but abruptly from +26 to +17. That effect was overwhelmed by Republicans, whose views of the economy shot up 16 points.

Pew has observed the same phenomenon:

Actual, measured economic conditions did not materially change with partisan control of the White House, but Republican perceptions of them have improved dramatically, while Democrats’ perceptions have deteriorated little, if at all—despite Trump’s massive unpopularity among liberals.

You can draw any number of inferences from this observation, but the most inarguable, in my opinion, is how devastating it is to the conceit that U.S. political dysfunction—embodied most recently in the GOP theft of a Supreme Court seat—should be attributed to both parties in equal measure. Reflexive even-handedness the analytical foundation of countless news stories, and nearly all punditry, but it wasn’t derived from dispassionate observation of political reality. Rather, it was contrived to burnish the mainstream media claim to political neutrality, and the neutrality of parent companies. But its effect was to leave implacable conservative critics of mainstream culture totally dissatisfied, and has failed every other consumer in the market for accurate, unskewed news and on-the-level commentary. It should have been put to rest long ago, and can’t die soon enough.