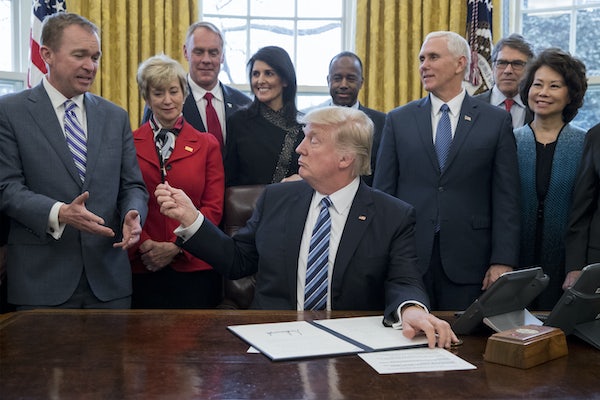 Donald Trump ruined everything by hiring a bunch of movement conservatives who think he’s a sucker.

It would be going too far to say President Trump’s top budget guy is happy to brag about how his boss is an easily manipulable dupe. But not much.

Over the course of an important interview with CNBC’s John Harwood, OMB Director Mick Mulvaney repeatedly betrays the fact that his ideological goals (as a movement conservative, and founding-member of the House Freedom Caucus) differ from Trump’s campaign promises in many ways—but that he thinks he can outmaneuver his boss.

Here’s how Mulvaney describes his budget-writing process, which culminated in a policy blueprint that would devastate Trump’s core supporters.

I laid to him the options that Mick Mulvaney would put on a piece of paper. And he looked at one and said, “What is that?” And I said, “Well, that’s a change to part of Social Security.” He said, “No. No.” He said, “I told people I wouldn’t change that when I ran. And I’m not going to change that. Take that off the list.” So I get a chance to be Mick Mulvaney. I get a chance to have those same principles. And I give ‘em to the president, and he makes the final decisions.

Mulvaney makes no effort to hide the fact that Trump’s policy knowledge is rudimentary, but tries to suggest that Trump knows where his red lines are and won’t knowingly cross them. Fortunately, as Mulvaney lets on, he can be fooled into crossing them!

[H]e probably didn’t know what the Appalachian Regional Commission did. I was able to convince him, “Mr. President, this is not an efficient use of the taxpayer dollars. This is not the best way to help the people in West Virginia.” He goes, “OK, that’s great. Is there a way to get those folks the money in a more efficient way?” And the answer is yes.

HARWOOD: I’ve had interviews with Republicans from Paul Ryan to John Thune who have been making the case that “we are going to persuade the president that we have to do something about entitlements.” How are you going to manage that?

MULVANEY: My guess is the House will do either that or something similar to that.

HARWOOD: Because of his pledge, President Trump would veto it?

MULVANEY: That’s not a really conducive way to sort of maintain a relationship between the executive and the administrative branch. Let them pass that and let’s talk about it.

On using a debt limit increase as a vehicle for entitlement reform.

There’s a lot of entitlement reform other than just how old do you have to be to get your Social Security benefits.

I don’t assume Trump will fall for all of these tricks, and I definitely don’t assume the GOP Congress if functional enough to present Trump with promise-breaking bills that he can be fooled into signing. But to the extent that he ever had a chance to become a paradigm-shifting president, he blew it when he picked a bunch of ideologically orthodox conservatives, with grander commitments and ulterior motives to run his policy operation. They think he’s the sucker, and with good reason.