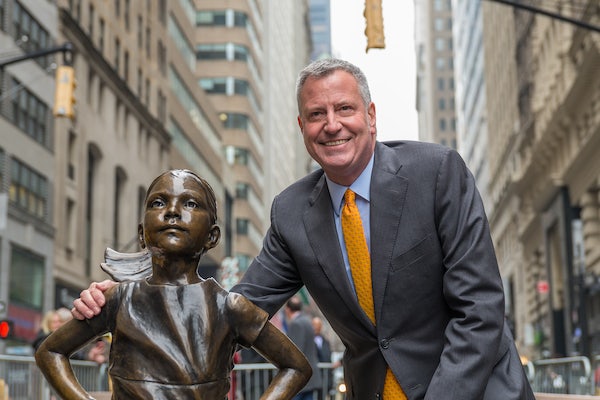 If only Bill de Blasio were as passionate about things that mattered as he is about “Fearless Girl.”

The mayor of New York City has found his Waterloo. And he’s decided he’s going to charge into battle, saber drawn. But instead of yelling, “Vive la France!” he says things like this:

Yes, let’s be blunt: This is ridiculous. “Fearless Girl,” the small statue of a child standing defiantly in the path of Arturo Di Modica’s iconic “Charging Bull” in the Financial District, was erected just in time for International Women’s Day last month. And it’s been something of a cause célèbre ever since. She’s been draped in everything from “pink pussy” hats to MAGA gear; she’s been both hugged and humped.

But the question is, should she stay or should she go? Di Modica recently made an interesting case that “Fearless Girl,” which unquestionably derives its meaning from direct interaction with his piece, not only negatively alters the meaning of his work, but also violates his rights as an artist. Christina Cauterucci at Slate sums up the argument nicely:

Before Fearless Girl came on the scene, the bull was an encouraging representation of a booming economy. Now, charging toward a tiny human, it’s a stand-in for the gendered forces that work against women’s success in the workplace. This isn’t the same kind of contextual shift that might result from a curator’s juxtaposition of two works; the girl is derivative. Di Modica meant his bull to stand alone—now, it’s as if Visbal and New York City have made a solo piece a diptych without his consent.

There are other problems with the piece. It was commissioned by State Street Global Advisors, a giant financial company that has its own issues with women in the workplace. It traffics in a brand of “Lean In” feminism that seems more concerned with putting women at the top of rapacious mega-corporations than with true egalitarianism. And, as Jia Tolentino noted at The New Yorker, it infantilizes the women’s movement.

Wherever you stand, this is a fine conversation to have. But de Blasio seems ill-equipped to have it, having clearly pegged this virtually meaningless issue as a way to burnish his feminist bona fides.