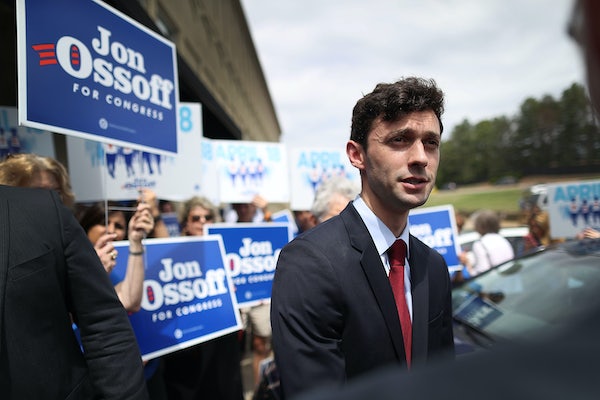 Don’t believe anyone who says Jon Ossoff’s result in Georgia was a loss for Democrats.

The Democratic candidate fell just short of 50 percent of the vote in Tuesday’s special election for the House seat vacated by Health and Human Service Secretary Tom Price, Ossoff now heads to a runoff with Republican candidate Karen Handel, whom many expect to win in the Republican-leaning Sixth District.

But as I wrote earlier this month, framing the race as a test of the Trump resistance—a contest that might even be predictive of 2018 congressional races—was always overblown. Though Hillary Clinton dramatically over-performed in the district during last year’s presidential election, Trump still won, and the DNA of the suburban Atlanta enclave remains Republican. Besides, special elections tend not to be predictive of midterm congressional races. That’s why Trump supporters are wrong to cast Tuesday as a huge loss for Democrats. At the same time, former Hillary Clinton press secretary Brian Fallon is probably over-reading the results when he writes:

There’s just no telling what the national political landscape will look like next November, and it’s simply not safe to extrapolate from a special election in which there was no incumbent and Ossoff raised over $8 million, 95 percent of it from outside the state. In Fallon’s defense, Sabato’s Crystal Ball managing editor Kyle Kondik told me, “This is the kind of district that Democrats need to compete in to win future House majorities,” noting that “the Democratic Party has become not just urban-centric but suburban-centric.”

Ossoff’s race now proceeds to a June 20 runoff, and the conventional wisdom is that Handel, who portrays herself as an independent voice rather than pro-Trump, has the edge. Even so, analysts including Kondik and the Cook Political Report are calling the race a toss-up. Jim Galloway, a political columnist for The Atlanta Journal-Constitution, told me a Handel victory could be read as good news for Trump opponents, too—a “demonstration of Trump antipathy among Republicans.... or at least an acknowledgement that you need somebody who could be a check on Trump.”

This post has been updated to reflect the final election results.