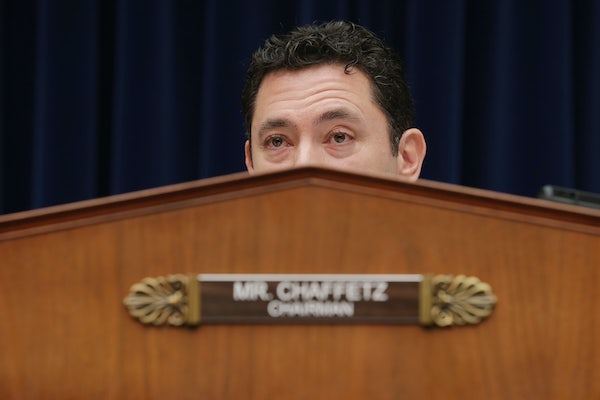 Is Donald Trump the reason Jason Chaffetz just made the surprise decision to not run for re-election?

On Wednesday, BuzzFeed’s Alexis Levinson reported that the Utah congressman had decided not to run for re-election in 2018. Chaffetz confirmed the report shortly after, posting on Facebook that he planned to enter the private sector. In a news conference, he indicated that he might run for office again—he ruled out a run for the Senate in 2018, but Utah will be electing a new governor in 2020.

Chaffetz’s tenure in Congress has been characterized by his extreme ambition and his partisan overreach. He led the interminable investigation into Hillary Clinton’s use of a private email server, and seemed to be motivated more by what it would do/was doing for his career than what Clinton actually did with her server. Chaffetz was perhaps best known for his work investigating Clinton’s role in the Benghazi attacks—he was an early advocate for an investigation and traveled to Libya twice—and suggested that the investigation could result in the impeachment of President Obama.

Chaffetz’s investigations were tailor-made for Fox News and rightwing radio. Though his stunts often undercut the investigations’ ability to produce meaningful work, they certainly grew his profile. Chaffetz also made a quixotic bid to become speaker of the House in 2015, even though he readily admitted he probably was not the best candidate for the job. But it was in keeping with Chaffetz’s time in Congress—it was yet another instance of the congressman taking any opportunity to elevate his profile.

Chaffetz’s ambition makes his decision to stand down a strange one, especially since he holds the powerful chair of the House Oversight Committee, which is a good place for a young (-ish, Chaffetz is 50) man in a hurry. The fact that Chaffetz said he is not planning to run for Orrin Hatch’s Senate seat in 2018 makes it stranger still. It may simply be that Chaffetz wants to make some money while he can, and sees this as a good opportunity to do so. Chaffetz may have also taken a look at this re-election chances in 2018—the polling is not great for him and he has attended some fiery town halls recently—and decided that punting is better than losing.

But Chaffetz may have also been motivated by his proximity to President Trump. As chair of the House Oversight Committee, there is enormous pressure on him to investigate Trump with the same vigor that he investigated Clinton. Furthermore, being a Republican in Congress increasingly means having to answer for everything that Donald Trump says or does. Chaffetz may very well have realized that all this is not very good for his political future. Chaffetz’s decision not to run, in other words, may be in keeping with his outsized ambition. He merely realized that Donald Trump is getting in his way.