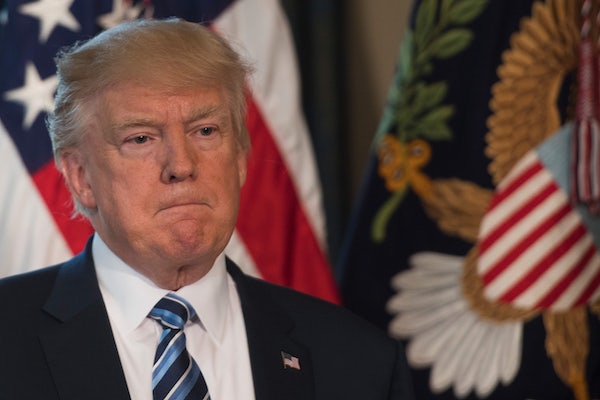 Republicans are starting to freak out about 2018 already.

President Donald Trump’s approval rating continued its long swoon over the weekend, with an NBC News/Wall Street Journal poll putting him at 40 percent and an ABC News/Washington Post poll putting him at 42. These surveys pegged his disapproval rating at 54 and 53 percent, respectively, and the Post noted that no other president since 1945 has been this unpopular approaching his 100th day in office.

The silver lining for Trump is that “96 percent of those who supported him in November say they’d do it again today,” according to the Post poll. Still, Republicans are already worrying that his unpopularity—combined with a lack of legislative accomplishments and general incompetence—could drag down the rest of their ticket in the 2018 midterm elections.

Politico reported Monday morning that “interviews with more than a dozen top Republican operatives, donors and officials reveal a growing trepidation about how the initial days of the new political season are unfolding.” Trump’s troubles “have drawn the attention of everyone from GOP mega-donor Sheldon Adelson, who funneled tens of millions of dollars into Trump’s election and is relied upon to bankroll the party’s House and Senate campaigns, to Senate Majority Leader Mitch McConnell.” Meanwhile, potential 2018 candidates are worried about the political environment they could be facing if they run for office.

This year’s special elections may be overrated predictors of how the 2018 campaign will play out, but reports like these should give Democrats heart. The GOP is already sweating about Trump weighing down a midterm election, and his presidency has barely begun.