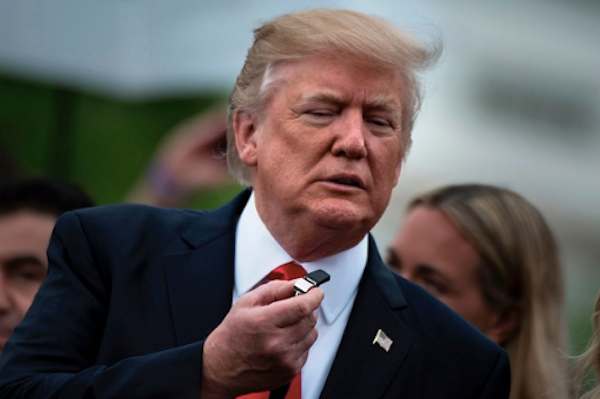 The two parties were on their way to keeping the government open for business when Trump burst onto the scene like a racist Kool-Aid Man, demanding that the passage of a continuing resolution contain funding for The Wall on the Mexican border. If the resolution fails to pass by 12:01 A.M. on Saturday, April 29, the government will shut down. This would also be Trump’s 100th day in office, a coincidence that is not lost on him or his administration. While the Trump administration has tried to claim that, actually, they are not mad at all that they have gotten nothing done legislatively, they are very mad indeed. This is why Trump has thrown a bunch of grenades into congressional budget negotiations, demanding money for a Wall that is an absolute non-starter for Democrats and even some Republicans.

This is an absurd strategy for a lot of reasons. First, Trump promised that Mexico was going to pay for The Wall. This is not the kind of promise that politicians usually make, because for The Wall to be built it will require at least part of the promise to be broken (i.e. Mexico paying for The Wall). Second, the absolute worst thing that could happen for Trump’s first 100 days would be the government shutting down on its 100th day. That would not only further damage Trump’s already dismal favorability ratings, but it would create a ripe metaphor that would explain the previous 99 days, solidifying an impression of incompetence and confusion.

Both President Clinton and President Obama didn’t take nearly as much damage as Congress did during previous shutdowns. But then again, their party at the time did not control both Congress and the White House. In fact, Trump would probably bear more blame than Congress for a government shutdown. This suggests that his demand for The Wall was another one of Trump’s famous bluffs. He wanted to see if he could get concessions from Congress, but ultimately was not committed to follow through on his threats.

So it should be no surprise that, with four days to go until a shutdown, Trump signaled a retreat. On Monday evening, The Washington Post reported that Trump had “softened his demand that a deal to keep the federal government open include money to begin construction on his long-promised border wall.” Trump has promised to fight another day, telling conservative journalists on Monday that he would seek to start construction on The Wall by September.

But one thing is clear: Trump could not have screwed this up more badly. He spent a week of valuable time threatening to derail a rarity in contemporary Washington: a fairly reasonable negotiation between the two parties. And he didn’t get anything out of it. If anything he showed once again that he’s all bluster—that he’ll make a lot of noise but, when push comes to shove, ultimately back down.