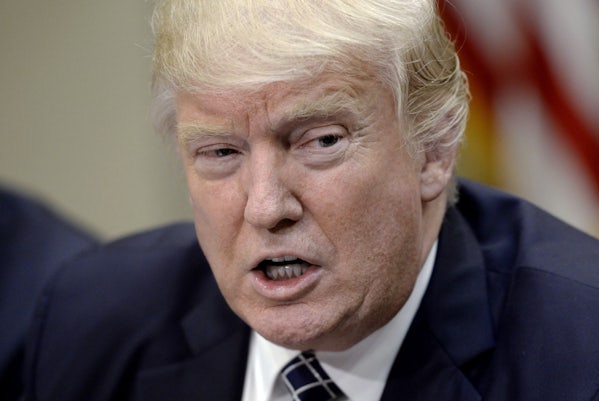 Trump’s attacks on the judiciary are both shameful and totally self-defeating.

On Tuesday a federal judge in California declared yet another Trump executive order—this one blocking federal funding for sanctuary cities—unconstitutional. As with the failed travel ban, two things sank the order: The first is that it was incompetently drawn up and the second is Donald Trump’s mouth. The judge in Santa Clara v. Trump cited Trump’s own words to bring the hammer down. The federal government has argued that the order is designed to encourage volunteer cooperation from sanctuary cities, but Trump said this: “I don’t want to defund anybody. I want to give them the money they need to properly operate as a city or a state. If they’re going to have sanctuary cities, we may have to do that. Certainly that would be a weapon.”

On Tuesday evening, the White House released an unhinged statement blasting the deal. “Once again, a single district judge—this time in San Francisco—has ignored Federal immigration law to set a new immigration policy for the entire country. This decision occurred in the same sanctuary city that released the 5-time deported illegal immigrant who gunned down innocent Kate Steinle in her father’s arms.” (The statement refers to Steinle multiple times—Steinle was also mentioned in Trump’s RNC speech.) “San Francisco, and cities like it, are putting the well-being of criminal aliens before the safety of our citizens, and those city officials who authored these policies have the blood of dead Americans on their hands.”

And on Wednesday morning, Trump himself got in on the action:

It’s hard to imagine something more destructive than the White House’s attempts to delegitimize the judge, especially following Jeff Sessions’s racist dismissal of a federal judge in Hawaii and Trump’s racist attacks on a federal judge in Indiana during the 2016 election. This is a statement designed to corrode trust in the judiciary branch by insisting that judges in certain (liberal, urban, diverse) places are somehow less authoritative.

Trump’s own tweets betray either a deep ignorance of the judicial system or an attempt to launch a preemptive attack. The Ninth Circuit of Appeals is the next court that will hear the case—the judge who blocked the sanctuary city order does not sit on the Ninth Circuit. That court will likely rule that the order is unconstitutional—and Trump will almost certainly respond with another corrosive tirade.