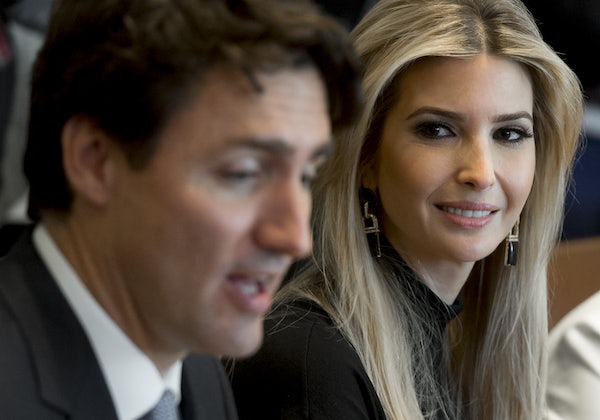 Oh cool, Ivanka Trump is setting up a bribery fund in the White House.

Axios’s Mike Allen rather nonchalantly passes along what should be a red-flags-everywhere disclosure from first daughter/business woman/conflict-of-interest-ridden White House adviser Ivanka Trump that she’s setting up a “massive fund” to “invest in women and girls.”

That this story pokes its head up as the political press scrutinizes the verb tense of every squirrelly Chelsea Clinton utterance about her future political ambitions, and debates the ethics of President Obama’s (admittedly poor) decision to accept a $400,000 Wall Street speaking fee, recalls the summer of 2016, when the media dynamic that ultimately allowed Donald Trump to become president took hold.

During the post-convention lull, the press strained hard to create the impression that Hillary Clinton had used (and would use) the Clinton Foundation as a vehicle for pay-to-play corruption, while Trump ran the most deviant and corrosive campaign in modern history and his far more well-documented corruption received relatively scant attention.

At the moment, Trump needs Congress to fund the government, which gives Democrats some leverage, at least in theory, to demand that Ivanka Trump’s fund be dismantled, or custody of it transferred to an outside charity with no White House or Trump family connections. The fact that Donald Trump, with media complicity, used the specter of pay-to-play corruption to abnormalize and disqualify Hillary Clinton should make the fact that Trump is now bringing the specter to life in his own White House a paralyzing scandal.