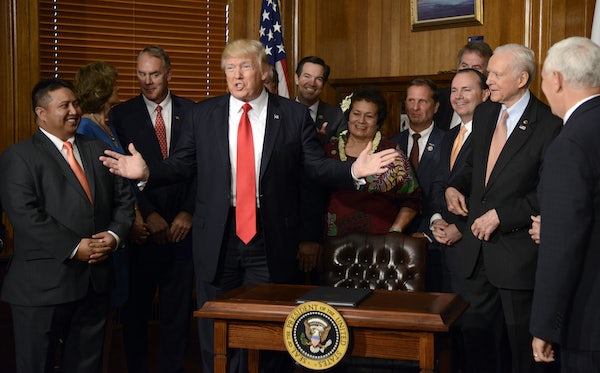 Donald Trump has been bullsh*tting all week.

Wednesday was one of those days in the White House. The administration released a barrage of plans, figures, and tweets on every conceivable issue, suggesting that it’s just about ready to fight a war on eleven different fronts at the same time—and maybe start a real war too. This tweet, from HuffPo’s Sam Stein, sums up the day that was nicely:

By the end of the day, the White House had backed off its threat to leave NAFTA. It is still beating the drum of war on North Korea, but it seems to be doing so because it thinks it will help its negotiating position—war is not imminent. The pledge to cripple Obamacare has been around for a month, and still faces the same obstacles that have prevented Trump from making good on that pledge. The tax reform plan released by the administration doesn’t deserve to be called a “reform” or “plan”—it’s unlikely to pass because it explodes the deficit, is heavily tilted toward the rich, and, again, is so skeletal that the word “plan” is really too generous. Trump’s desire to break up the Ninth Circuit Court of Appeals, which has consistently ruled against his executive orders, is destructive but not realistic. It is the kind of bombastic, headline-grabbing, and ultimately not-at-all-serious statement that Trump believes will get him out of jams and, if he is lucky, project an image of a guy who is in charge.

It’s worth taking a moment to examine what would happen if the Trump administration did try to follow through with any of these plans. Pulling out of NAFTA without introducing a substitute would be an economic disaster and would likely result in a trade war with Mexico. War in North Korea would not only be unpopular, but also a global catastrophe that could very well result in hundreds of thousands of civilian casualties. If the White House were to pull the rug out from under Obamacare, it would face severe political consequences. Americans generally don’t like the few tangible things in Trump’s tax plan, but it’s not even remotely close to being a piece of legislation—and we all saw what happened the last time Republicans tried to pass an actual piece of legislation. The court-busting scheme would result in a constitutional crisis and months of bad press, all of which would cement the image of Donald Trump as a wannabe dictator.

The Trump administration’s midweek sprint left news organizations with whiplash. They had to report with straight faces all the new “developments” coming out of the White House. But there’s no indication that this is anything other than a load of bullshit. Trump’s bombast is self-evidently about narrative. His 100th day in office will be Saturday and this flurry of activity seems designed to simultaneously distract from negative assessments of his first 100 days and to show that the White House is a hive of activity. The Trump White House has insisted again and again that this is the most active first 100 days in presidential history (it isn’t), and this week’s veneer of frenetic activity proved that there’s just nothing there.