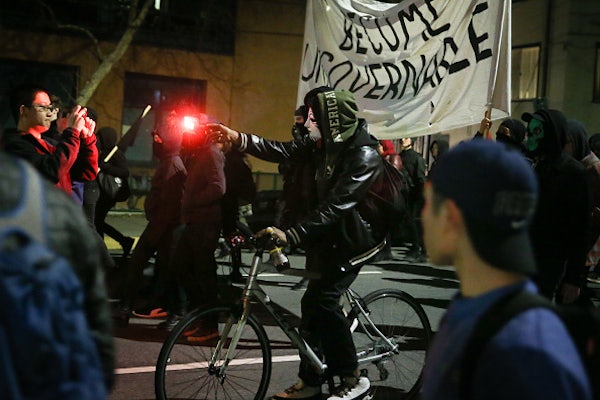 This morning, Jesse Singal implored liberals to “fight for free speech” on college campuses in New York’s Daily Intelligencer. In the wake of Ann Coulter deciding not to give a speech at Berkeley, he argues, “Just because the most high-profile recent examples of campus speech getting shut down have affected the right doesn’t mean that would be the norm were free-speech norms and rules to crumble more completely.”

It is true that the recent discussion of free speech and censorship on college campuses has centered around high-profile, inflammatory conservatives, meaning many liberals might not be moved to their defense. It is also true that the left is not immune to censorship in the university. The example Singal uses to demonstrate this is Fordham University’s refusal to approve the club Students for Justice in Palestine, the founders of which filed a lawsuit against the university yesterday. Fordham’s Dean of Students rejected the club on the grounds that

the Israeli-Palestinian conflict ... is a topic that often leads to polarization rather than dialogue. The purpose of the organization as stated in the proposed club constitution points toward that polarization. Specifically, the call for Boycott, Divestment and Sanctions of Israel presents a barrier to open dialogue and mutual learning and understanding.

Singal makes a nuanced argument about the subjectivity of what kind of speech should be protected or “what sort of speech is considered so harmful it should be suppressed.” He also notes that, in a university system, students are entirely at the political whims of administrators. But what is so interesting about the example of SJP at Fordham is that, by comparison, it shows the problems of claiming that Ann Coulter’s speech is being suppressed.

As Aaron Hanlon argued in the New Republic earlier this week, choosing not to host Ann Coulter or Milo Yiannopoulos on campus is not a suppression of their free speech. Academia certainly has an important place in selecting and elevating certain voices to relevance in a broader culture, but let’s not forget that a college isn’t a town hall: it’s a particular community of people engaged in intersecting missions of education. Coulter is not a member of that community and she has no claims upon it. Campus life is curated, and none of us outside of it are guaranteed access to that platform. Aside from safety concerns, that doesn’t mean trying to cancel her appearance was necessarily the right decision—it very well may be true that students should challenge her views face-to-face—but doing so is still not a violation of her rights.

That cannot be said, however, of the Fordham case. As Singal notes, Fordham is a private university, and as such the question of free speech in this case relates not to the Constitution but the university’s own policies. But unlike Coulter, who has a regular platform on television and in publishing, the students of Fordham are truly limited by what their university will and will not allow as protected speech. Those students have been denied the opportunity to engage in the political action they find meaningful. They have been punished for peacefully protesting that decision. At Berkeley, the College Republicans who invited Ann Coulter to speak presumably retain their official club status and likely their budget.