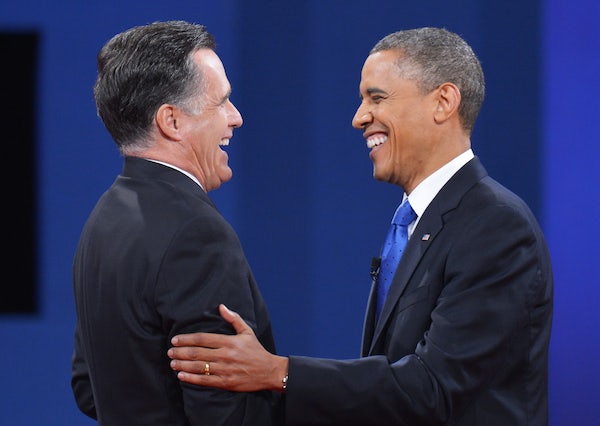 I want to make a quick end-of-the-week point about the debate over whether those criticizing President Obama for accepting a paid Wall Street speaking gig are creating a double standard for him. George W. Bush and other past presidents have joined the lecture circuit, given speeches to the corporations and financial interests they had once regulated, and nobody really seemed to think much of it. Obama does it and it’s a big news story.

As a normative matter, it’s true that if accepting money to give a speech on Wall Street is a bad thing for current or future or former politicians to do, then they should all face comparable scrutiny and criticism when they do it.

But what about as an ideological housekeeping matter? Is it unfair or unwise of liberals to criticize Obama for harming the image of the movement he once led, if conservatives give their standard bearers a total pass when they do far more corrupt things?

Here, I think Obama’s defenders are making a category error projecting the animating concerns of the Democratic base on to the Republican base. It’s true that conservatives don’t care that Bush gave Wall Street speeches, or that Trump is a walking conflict of interest, but that’s because the glue holding the conservative coalition together isn’t labor-populism, but rather white identity politics. If you think about which Republican politicians are viewed most suspiciously by rank and file Republicans and conservative thought-leaders, it isn’t the supply-siders, per se, or members of the Freedom Caucus, but the ones you might call cosmopolitan-curious conservatives. People like Marco Rubio and Paul Ryan, who supported comprehensive immigration reform and believed, before Donald Trump won the GOP nomination, that the GOP had to become more ethnically inclusive for the good of the party. Trump could shoot someone on fifth avenue and his core supporters wouldn’t care, but if he began (or had a history of) giving secret, paid speeches to the National Council of La Raza, or was caught working behind closed doors with Chuck Schumer on an amnesty bill, he would have hell to pay with them.

For better or worse (and obviously I think for FAR better) the cohering force in Democratic politics is much different. It is, or it should be, the idea that the little guys—whether they’re immigrants and ethnic minorities facing xenophobia and racism, or workers laboring under oppressive conditions—deserve strong and loyal advocates. No Democratic politician is going to face blowback for appealing to blue-collar Trump voters on class-solidarity grounds, or for working to align environmental and labor interests in a fancy board room. But giving a paid speech to the big guys does convey the impression that the advocacy is hollow. Today’s blowback stems from the same kind of sense of betrayal Obama’s supporters felt when he invited Rick Warren to deliver the invocation at his first inaugural.