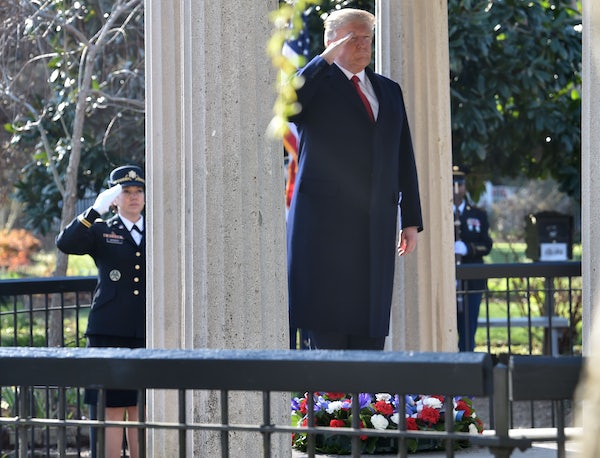 On Monday, in an interview with Sirius XM, Trump claimed that Jackson, who died in 1845, could have stopped the Civil War, which began in 1861. “I mean had Andrew Jackson been a little bit later you wouldn’t have had the Civil War. He was a very tough person, but he had a big heart,” Trump said. “He was really angry that he saw what was happening with regard to the Civil War, he said, ‘There’s no reason for this.’” Later on Monday, Trump doubled down on his revisionist history:

Trump has clearly picked up some facts about Jackson. In the interview with Sirius he correctly noted that Jackson blamed his wife’s death on her being (correctly) labeled a bigamist and an adulteress by political opponents and the media—exactly the kind of factoid you’d expect Trump to pick up. As for the Civil War claim, many pointed to the nullification crisis of 1832-33, when Jackson threatened to invade South Carolina after it threatened to secede from the United States. The crisis was resolved without force, but it was a precursor to the Civil War in that it was an early instance of a southern state making an argument that its own sovereignty superseded that of the United States.

That, however, is more of an academic argument. And while Trump may have been referring to the nullification crisis, there’s little to suggest that Jackson would have prevented the Civil War. Jon Meacham, who wrote the popular Jackson biography American Lion, told the New York Times, “The expansion of slavery caused the Civil War. And you can’t get around that. So what does Trump mean? Would he have let slavery exist but not expand? That’s the counterfactual question you have to ask.”

So where did the president get the bizarre idea that Jackson could have averted the Civil War? Trump famously does not read books. But he was recently reported to have dipped into two books about Jackson—Jon Meacham’s American Lion and Robert Remini’s The Life of Andrew Jackson. And here is the opening paragraph of American Lion, which begins with the nullification crisis:

It doesn’t seem like a huge leap from this paragraph to Trump’s expansive interpretation that “Jackson was really angry that he saw what was happening with regard to the Civil War.” Of course, Trump gets it wrong. Yes, Jackson was angry at the prospect of South Carolina seceding, but there’s nothing to suggest that his anger was aimed at slavery, the root cause of the Civil War. (It bears remembering that Jackson was a slaveowner himself.)

But if you’re looking for a source for Trump’s claim, it is not unreasonable to assume that Trump, who, again, does not read books, picked up American Lion, read a paragraph or two, then put it down with the conclusion that Jackson was very angry about the Civil War. He may have ditched that interpretation had he read a bit further into Meacham’s biography, but that seems like too much to expect of Trump’s attention span.