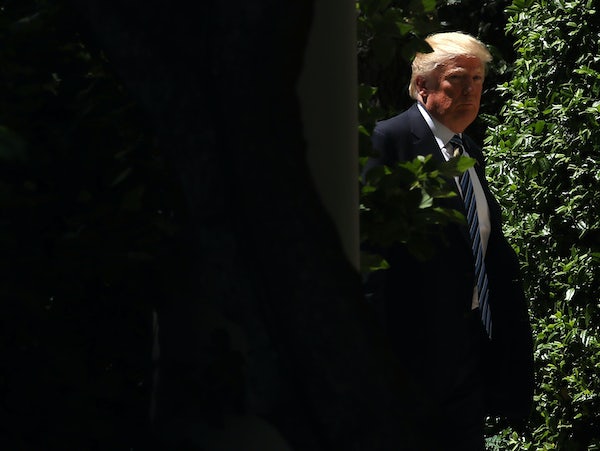 Before he walked out on John Dickerson, Donald Trump told the CBS News anchor that Kim is “a smart cookie.” This is high praise from Trump, whose vocabulary of insults and compliments is more or less that of your average JV hockey coach. “At a very young age, he was able to assume power,” Trump said of Kim. “A lot of people, I’m sure, tried to take that power away, whether it was his uncle or anybody else. And he was able to do it.” Trump also praised Kim for fending off his uncle, who allegedly tried to seize power from him and was later executed.

On Monday, Trump told Bloomberg that he would like to meet Kim. Sean Spicer, who has a special knack for doing whatever the opposite of translating is, made things even more complicated in Monday’s press briefing. Asked whether Trump would meet with Kim, Spicer sort of followed his boss’s lead, saying, “The bottom line is the president is going to do what he has to do. ... I think his point was—he went over this in the interview—that he assumed power at a young age when his father passed away. And there was a lot of potential threats that could have come his way, and he’s obviously managed to lead a country forward. Despite the obvious concerns that we and so many other people have, he is a young person to be leading a country with nuclear weapons.” OK!

Does Trump think that flattery will work on strongmen? He appears to have two modes when it comes to foreign policy, saber-rattling and sucking up. Of course, another possibility is that Trump was just winging it, and now the rest of the administration has to follow along—this is reportedly what happened when he invited Rodrigo Duterte, the murderous president of the Philippines, to the White House.

In either case, it’s better than the administration’s previous strategy, which was to escalate tension in the Korean peninsula for ... reasons. But that isn’t saying much.