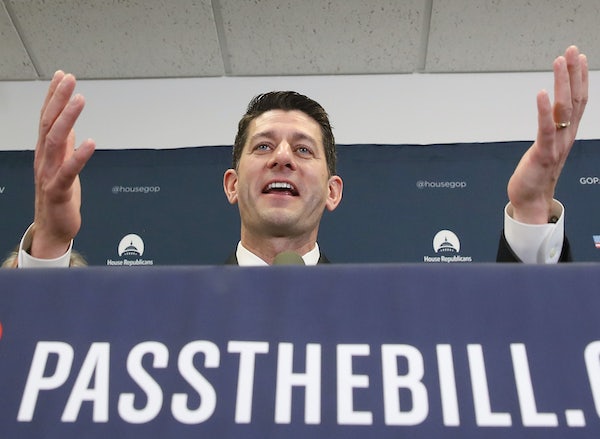 The GOP’s Obamacare repeal is a cynical disgrace.

The American Health Care Act is horrible and unpopular. Voters hate it because they want health care coverage to increase and health care costs to decrease—the bill likely does the opposite, while providing the top 2 percent of earners with a massive tax break. Every imaginable patient and health care advocacy group opposes the bill because it would likely provoke a crisis by forcing millions of people to go without insurance, while making it unaffordable for millions more. Keep in mind, too, that these would be some of the sickest, most vulnerable people in America.

House Republicans hate the AHCA for different reasons. They just want it to go away. If the vote that’s scheduled to go down on Thursday does, in fact, go down, many will be voting on a bill that they haven’t seen and that the CBO hasn’t scored. It’s crucial that the vote happen before the score because Republicans expect that it will make the bill politically untenable.

Nancy Pelosi is still taking shit for saying, “We have to pass the bill so that you can find out what is in it, away from the fog of the controversy” about Obamacare in 2011. But Pelosi and other Democrats knew what was in the bill—she meant that voters would come to like the bill once they benefited from it. That prediction has come true. House Republicans are currently role-playing their own twisted version of how Obamacare went down—they’re about to vote on a deeply unpopular bill that they barely know anything about, consequences be damned. Early Thursday morning it came out that it could even affect the half of all Americans who get their health insurance from their employer—this is, legislatively speaking, not what you want to have happen hours before a vote.

After spending seven years whining about Obamacare and promising that they have a secret plan to make health care better and cheaper, it’s clear that Republicans have no plan—or, more importantly, a coherent philosophy about how the government should deal with health care. As a result, you have a bill that’s a hodgepodge of poorly thought out ideas and attempts at winning over blocks of congressmen. Obamacare, when it was finally set into law, was similarly muddled after months of negotiations, but it did have a basic philosophy about health care coverage. (Ironically, one of the problems that congressional Republicans are running into is that this vision was market-based and conservative—it’s hard to outflank the ACA from the right and create a health care landscape where coverage is expansive and cheap.)