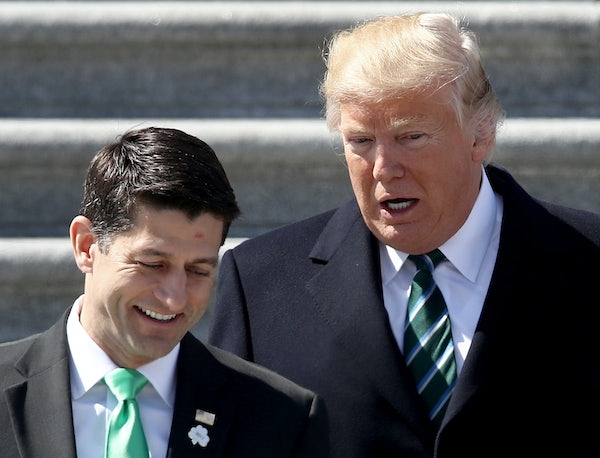 The GOP health care bill ramps up Washington’s war on the poor.

As the House prepares to pass the American Health Care Act, a lot of focus has rightly been placed on the MacArthur amendment, the deal-maker that allows states to get around Obamacare’s protections for pre-existing conditions. But it’s important to note the other parts of AHCA 2.0, which still drags poor people through the mud in the same ways AHCA 1.0 did.

The bill would cut Medicaid by $880 billion, through unprecedented changes in the program’s funding delivery mechanism. Here is Vox’s Sarah Kliff on the issue:

This bill would convert Medicaid to a “per capita cap” system, where states would get a lump sum from the federal government for each enrollee. Or states would have the opportunity of a block grant—a sum of money untethered from the number of people involved.

This is different from current Medicaid funding. Right now the federal government has an open-ended commitment to paying all of a Medicaid enrollee’s bills, regardless of how high they go. The per capita cap would amount to an $880 billion cut to Medicaid, as Vox’s Dylan Matthews explains. A block grant would go further, and would also weaken coverage protections for children and parents.

It’s hard to overemphasize how much of a radical shift block-granting Medicaid would be. This push echoes the drive to block-grant welfare in 1996. In the name of “flexibility,” block-granting welfare gave states greater authority to decide who was eligible for the program and how the money would be spent, which ended up diverting funds away from basic assistance. Similarly, if states decide to opt into block-granting for Medicaid, they would no longer have to comply with most federal Medicaid requirements for children and adults (aside from the minimum income eligibility requirements for children and pregnant women), and would have the flexibility to impose draconian cuts to the program’s benefits and eligibility.

Here’s an example of a can of worms that could theoretically be opened up under block-granting: drug-testing Medicaid recipients. Since welfare reform, states have had the ability to conduct reasonable suspicion drug-testing for welfare recipients, which has been a complete waste of time and money. For Medicaid, this was basically an unheard-of policy until recently, when Wisconsin’s Governor Scott Walker submitted a waiver request to allow the state to drug-test Medicaid beneficiaries. The request likely has little chance of getting through (but it’s dependent on the Trump administration, so who knows). Still, block-granting Medicaid could open up a different avenue to push through similarly punitive policies.

Furthermore, the bill would give states the ability to impose work requirements to Medicaid for the first time, another policy modeled after welfare reform. As a report by the CBPP points out, the work requirements dimension of TANF (aka welfare) has not increased long-term employment or reduced poverty, but has pushed more people off the program. Similarly, as Vann Newkirk II wrote during the first AHCA push, “There isn’t much evidence that penalizing the Medicaid population for not working will improve the program, its outcomes, or job creation.” In essence, work requirements are about punishing poor people, not helping them find jobs.

The GOP’s bill is an outright attack on the poor. As Democrats prepare to defend Obamacare, there also needs to be a larger conversation about how to change the landscape of poverty for the better, and that includes fixing the block-granting and work requirements that were introduced in the 1990s.