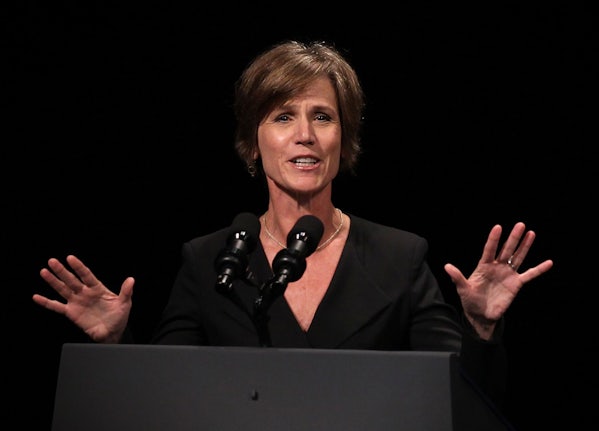 In Trump’s first two months in office, it seemed like there was a new Russia bombshell every other day. But things have gone (relatively) quiet on the Russian front over the past several weeks, as Republicans’ wheezing attempts at repealing and replacing Obamacare gobbled up headline space. Even when James Comey testified before Congress last week, Russia—the ostensible subject of the hearings—didn’t dominate news coverage. Instead, the story coming out of the hearings was Comey’s self-pitying defense of his unprecedented role in the 2016 election.

That should change when Sally Yates testifies before Congress today. Yates was the acting attorney general who notified the Trump administration about the nature of Michael Flynn’s contacts with the Russians, before she was fired for refusing to defend the administration’s travel ban. Yates is expected to testify that she gave a forceful warning to the White House that Flynn might be compromised by his dealings with the Russians—contradicting Sean Spicer’s claim that she wanted to give a less serious “heads up” about Flynn. Trump is unsurprisingly rattled—hours before she is scheduled to appear before Congress he tweeted this:

This is very troubling. Trump is intimidating Yates, who is about to testify before Congress, and suggesting that the federal government could retaliate by bringing charges against her for leaking classified information. It’s a crime to “harass someone in order to hinder, delay, prevent, or dissuade them from testifying before Congress.” This is only the latest in a series of troubling moves from the White House to try to prevent Yates from testifying.

Update: This post has been updated with a revised tweet from Trump. In the original, which has since been deleted, he spelled “counsel” wrong.