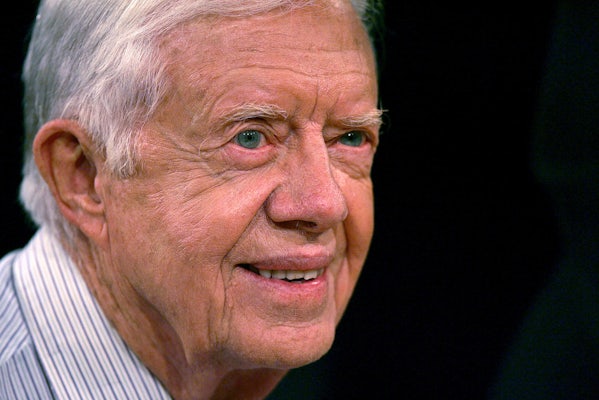 Bernie Sanders spoke at the Carter Center in Georgia last night and his host made a little bit of news. When Sanders mentioned the high turnout in the French election, Carter enthused, “Can y’all see why I voted for him?” The Daily Beast tried to get Carter to clarify these remarks, without success, but they were widely interpreted as meaning that Carter had voted for Sanders over Hillary Clinton in the Democratic primary.

It’s not clear if Carter’s endorsement would’ve made a difference if delivered in a more timely manner. Carter is popular among Democrats but his ambiguous record as president means his endorsement is of limited value. Still, one big problem Sanders had was getting members of the Democratic establishment to support him. If Sanders had the public backing of a former president, he might have won over more members of the Democratic elite.

It should be noted that Carter has long been a Clinton scold and skeptic. (By all accounts, the two sides genuinely dislike each other.) Carter, whose post-presidency was light on the jet-setting and celebrity-stroking and lucrative speech-making that has defined Bill Clinton’s, could have burnished Sanders’s populist credentials and offered an even starker contrast to the Clinton way of doing things.