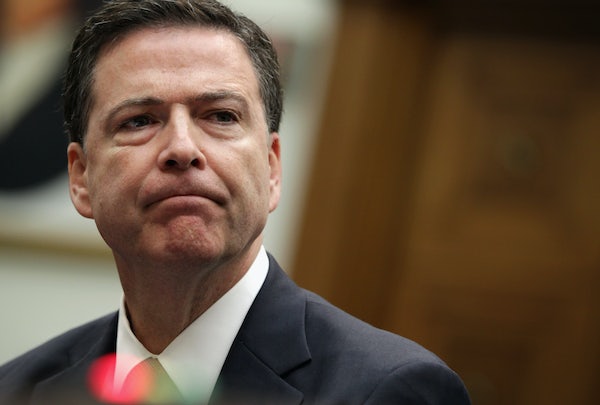 James Comey’s firing is a chilling abuse of power.

Comey had a role in investigating both candidates in the 2016 election. First, there was his eleventh-hour intrusion on October 28, when he said that the FBI was launching a new review of Hillary Clinton’s emails, a move that is widely believed to have been a deciding factor in Donald Trump’s win. And second, as FBI director, he was also leading a criminal investigation into the Trump campaign’s alleged ties to Russia.

Comey was fired on the recommendation of Attorney General Jeff Sessions. Here’s Donald Trump’s incredibly passive-aggressive note informing Comey he has been canned:

This is very Trump-y and seems to have been dictated by him—he couldn’t resist noting that Comey had reassured him “three times” that he personally was not the subject of the FBI’s investigation. (This may be technically true, as the investigation is into his campaign.)

But it gets stranger. Here’s the deputy attorney general’s memo recommending that Comey be fired:

The argument here is that Comey is being fired over his handling of the investigation into Hillary Clinton’s use of a private email server. This is very hard to believe because it’s May—six months after the election and ten months after Comey’s first infuriating public statement—and because the White House is not exactly known for its opposition to norm-busting or its desire to uphold the credibility of non-partisan institutions.

Instead, this seems like typical obfuscation from Team Trump—they have no actual objections to Comey’s handling of the Clinton affair, but will use it to muddy the discussion that will follow Comey’s firing for weeks. Add to that the personal animus in Trump’s letter to Comey, and you have a troubling sign that Comey was fired for his investigation into Trump and his team. It’s also a warning, perhaps, to the next FBI director.

This is all extremely unsettling. The FBI director has only been fired once before—when Bill Clinton fired William Sessions in January of 1993. But that was different: Sessions had made a number of ethics violations and the case was drawn out in public for weeks. This time, the FBI was blindsided:

Comey is obviously not being removed for the reason that the White House offered—his handling of the Clinton probe. Instead, the administration is apparently trying to tamp down dissent, sending a powerful signal to government officials who are investigating Trumpworld. Whether the Russia investigation continues is now an open question. If Trump nominates a replacement who is loyal to Trump—the quality that he tends to privilege above all others—then this is a very, very scary development.