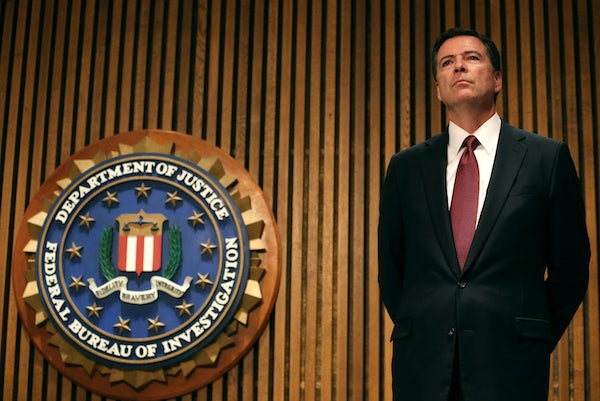 On Tuesday, Trump blindsided the nation by firing the FBI director like he was a contestant on The Apprentice. (He apparently surprised Comey himself, who got the news from cable television.) The reason the White House has given for his ouster—that it was because of Comey’s handling of Clinton’s emails—is clearly concocted for political cover. We know that Attorney General Jeff Sessions had been tasked with coming up with a reason to fire Comey, and, according to Politico, Trump himself had become increasingly enraged by the persistence of the FBI’s investigation into his campaign’s ties to Russia.

Democrats have responded with an aggressive call for a special prosecutor. Senate Minority Leader Chuck Schumer stated that, without one, “every American will rightly suspect that the decision to fire Director Comey was part of a cover-up.” Senator Ed Markey termed it a “constitutional crisis.” Senator Bob Casey went with a more succinct sound bite: “This is Nixonian.” (Republicans have also responded, but in the feeble admonishments of a Park Slope parent.)

Since the enormous backlash to the news, the president has tried to pin Democrats for their “hypocrisy.”

This argument holds no water. Democrats are criticizing Trump’s decision because it is an assault on the rule of law. If Trump was really firing Comey for the Clinton emails, he would have done so months ago. In an administration that has flirted with authoritarianism since it inception, this was Trump’s most spectacular assault on this country’s democratic tradition. Trump’s “well you didn’t like Comey either” is an insanely stupid straw man.

Even more surreal is the fact that the backlash seems to have taken the Trump team by surprise. According to Politico:

Trump made a round of calls around 5 p.m., asking for support from senators. White House officials believed it would be a ‘win-win’ because Republicans and Democrats alike have problems with the FBI director, one person briefed on their deliberations said.

Instead, Senate Minority Leader Chuck Schumer told him he was making a big mistake — and Trump seemed “taken aback,” according to a person familiar with the call.

And, as the night unfolded, “advisers were attacking each other for not realizing the gravity of the situation as events blew up.” It is the Trump brand of complete incompetence mixed with authoritarianism.

Trump is clearly trying to divert scrutiny with this line of argument. But the craziest thing is that he might actually believe it himself.