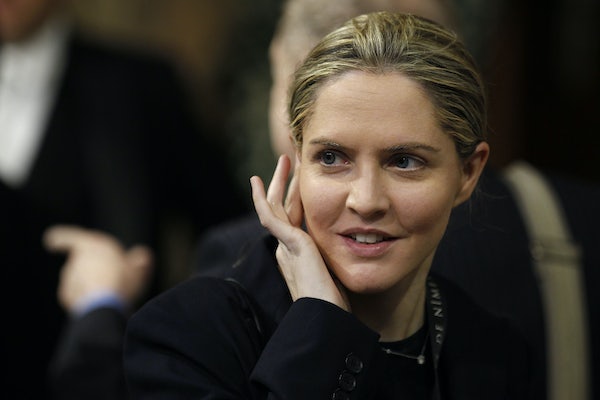 Louise Mensch is experienced in three areas: Writing chick lit, marrying famous music managers, and quitting a political career. Notice that Russian politics is not one of these areas. She has no degree in any subject that would grant her anything close to expertise on Russian politics. And she tweets things like this:

Louise Mensch doesn’t know anything about the Russia investigation. No one sane would leak any valuable information to a person who isn’t a journalist and whose only moment of public self-awareness occurred in 2012, when she appeared on the BBC’s Question Time and announced: “I did serious drugs and it messed with my head.”

Nevertheless, an aide for Democratic Senator Ed Markey reportedly cited Mensch as a source for the senator’s claim that a grand jury has been empaneled in New York to investigate the Trump campaign’s ties to Russia. The problem? Grand jury subpoenas were issued in Virginia. There’s no evidence of a second grand jury in New York. He got the claim from Mensch:

And she’s already got an excuse (also unverified, as is her wont):

Markey’s other source, The Palmer Report, also has a checkered reputation. As Dana Milbank previously reported for The Washington Post, the website started the conspiracy theory that Vladimir Putin ordered Bashar al-Assad to launch a chemical weapons attack against his own people to boost Donald Trump’s standing in America. Markey has since retracted his claim.

But Mensch and The Palmer Report are part of a disturbing emerging trend. Liberals desperate to believe that the right conspiracy will take down Donald Trump promote their own purveyors of fake news. Here’s Andrea Chalupa, another Twitter favorite:

There’s no evidence that Secretary of State Rex Tillerson has anything to do with the current scandal. It’s a completely unsourced, unverified theory. So is this:

Things are very bad, yes, but a “coup” is something specific, and calling the Comey firing a coup erases the meaning of an important term. Words mean things. Similarly not everything is “kompromat.”

Finally, it’s no help when individuals who regularly appear on TV as experts promote the sources of these conspiracy theories:

This is bullshit, and it deserves to be treated as such. So before you retweet, ask yourself a few questions:

1. Is that person a reporter for a legitimate news outlet?

2. If this person tweets a claim attributed to an anonymous source, do they follow that claim up with any reporting?

3. Does this person have credentials relevant to the subject matter they’re discussing?

4. Are this person’s claims drastically out of step with what’s currently being reported?

5. Why would a high-level official leak to this specific person?

6. Am I only tweeting this because it makes me feel good?

Finally, remember that sometimes conspiracy theorists will get things right. This is not actually evidence that they are real experts who merit your attention. It’s a matter of odds. A person who produces a large volume of content will naturally get a couple things right. And Trump offers plenty of fodder for amateur investigators: He really is corrupt, and we really do inhabit an unstable political moment.

We have always told ourselves stories about what waits in the dark. It’s how we cope with uncertainty. But campfire tales are usually just that: tales. To find your way in the dark, you need something real.