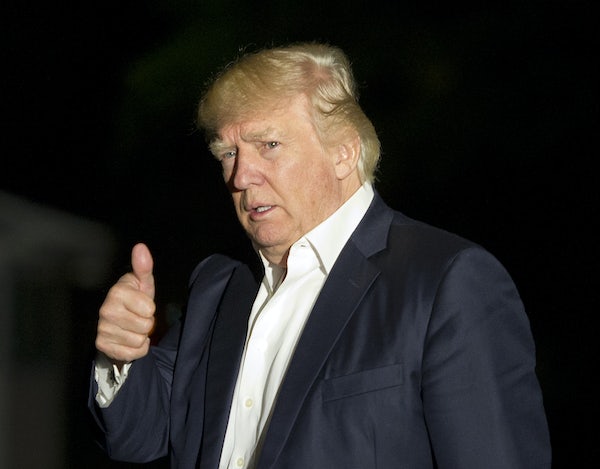 By firing James Comey, Donald Trump torpedoed his own presidency.

Call it the Bannon Test: If Steve says you’re crossing a line, then you should absolutely take a step back and reconsider how you got to this point. This is exactly what happened when Trump made the snap decision to fire James Comey earlier this week. Bannon, and many others in the White House, told Trump to wait until a more opportune moment, but Trump, whose impulse control is somewhere between beagle and 5-year-old, couldn’t wait. He fired his FBI director and kicked up a shitstorm that could be an existential threat to his administration.

The Trump administration’s initial case for firing Comey—that he had badly mishandled the investigation into Hillary Clinton’s emails—fell apart in less than twelve hours. Instead, it became clear that Trump was firing Comey because he did not like how Comey was handling the investigation into the Trump campaign’s ties to Russia. According to The New York Times, the decision to fire Comey was most likely made after the FBI director’s most recent stint before Congress:

Mr. Comey’s fate was sealed by his latest testimony about the bureau’s investigation into Russia’s efforts to sway the 2016 election and the Clinton email inquiry. Mr. Trump burned as he watched, convinced that Mr. Comey was grandstanding. He was particularly irked when Mr. Comey said he was “mildly nauseous” to think that his handling of the email case had influenced the election, which Mr. Trump took to demean his own role in history.

Trump appears to have fired Comey because he had simply grown tired of the Russia story undermining his presidency. He was reportedly furious when Russia once again reared its head, killing whatever momentum he had on the American Health Care Act.

Trump fired Comey to make the Russia investigation go away, but the irony is that he’s almost certainly made the situation much worse. The White House and the intelligence community are leaking like crazy. He’s in a full-fledged war with the FBI. Republicans in Congress are once again eyeing him warily, and may be forced to set up some sort of independent commission to investigate Trump’s ties to Russia. Even if there is no cover-up, the optics of firing the guy investigating you are insanely bad.

Trump insists that he has nothing to do with Russia and yet acts as if he has something incredibly damaging to hide. Before Comey was fired, Republicans in Congress seemed more than happy to run interference for Trump by turning the investigation into a referendum on the surveillance state. Trump has made that task infinitely more difficult. “I’m a very instinctual person, but my instinct turns out to be right,” Trump has said. But the master of instinctual politics keeps punching himself in the face.